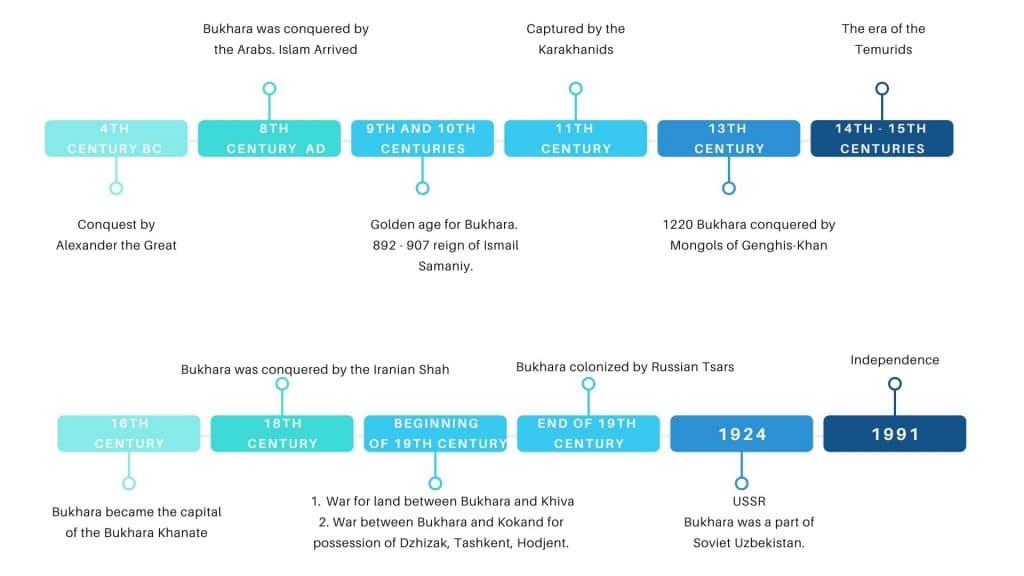 There is no exact evidence about the starting of Bukhara, and it is a mystery the creation of myths as complex as the facade of Lyabi Hauz. People believe the famous Persian epic, the city was founded by Siyavush a Persian prince from the Pishdadian Dynasty. Legend of Siyavush. This is a legend that tells that Siyavush was accused by his evil stepmother of seducing her.  He was forced to endure a trial by fire but arose from the flames unscathed and crossed the Amu Darya in search of new lands and fortune. In Samarkand, he married the princess Farangis, daughter of King Afrosiab, and her dowry included the vassal state of Bukhara. The story did not end there, however, as Siyavush was later accused of plotting to overthrow Afrosiab. Afrosiab had him executed in front of Farangis and his head was buried beneath the Ark’s Kalyon Gate, a permanent reminder to the citadel’s residents to remember their place and not to threaten the sovereignty of Samarkand.

Shorty the long history of Bukhara, the first mentions belongs to the 4thc. BC conquest by Alexander the Great. Located at the crossroads between Merv, the city in eastern Turkmenistan and one of the largest cities in the ancient world, Herat and Samarkand, Bukhara was in the best location to gain from Silk Road trade. It was already flourishing by the 6th-century bc when it was sacked by the Achaemenids, becoming a satrapy of the Persian Empire. The evident wealth of Bukhara would in many ways prove a curse, attracting the unwanted attentions of Alexander the Great in 329bc, then the succeeding invasions of the Seleucids, Graeco-Bactrians and the Kushans. Following next to the 8thc. AD Bukhara was conquered by the Arabs under command of Kuteyba-ibn-Muslim and began growing as cultural, religious, and philosophical center. It was the most significant period in the history of Bukhara, Arabs brought Islam to Central Asia. Forceful impositions led to a major uprising called the “Movement of People in White Clothes.” After the brutal defeat of the rebellion, the Arabs lost power to the local aristocrats, however, the goal was achieved: Islam was firmly entrenched as the dominant religion. The 9th and 10th centuries were a golden age for Bukhara. 892 – 907 reign of Ismail Samaniy. The Samanid ruler Ismail ibn Ahmed declared the political stability required for trade to flourish, and with his wealth, he patronized some of the greatest intellectuals and artisans in the Islamic world. The scientist, philosopher and physician Ibn Sina (known in the West as Avicenna), the Persian poets Ferdowsi and Rudaki, and the chronicler al Beruni all thrived in the city and completed their most important works here. 961 – 976 reign of the Emir Mansur-ibn-Nuh. Bukhara became the center of writers, scientists, and artists; the reign of the Samanids was marked by the flowering of architecture.

Next period from 11th to 13th centuries became the most difficult in the history of Bukhara. First, the city was captured by the Karakhanids, then by the Karakitai, and eventually by the troops of Genghis Khan. 1220 Bukhara conquered by Mongols of Genghis-Khan. The most catastrophically of all, Genghis Khan and the Mongol horde rode into town. Every one of Bukhara’s 30,000 troops was butchered, the city was torched, the civilian population including women and children killed or imprisoned, and the Great Khan himself stood in the Namazgokh Mosque and declared himself the ‘Scourge of God’. The city was utterly decimated and when the Arab traveler Ibn Battuta visited nearly 150 years later, he described it as still lying more or less in ruins. The city was practically wiped off the face of the earth, and the inhabitants were taken into slavery. But, being an important point on the Great Silk Road, Bukhara quickly recovered. Marco Polo, who visited here, described Bukhara as “a city of great grandeur”. The 14th – 15th centuries the era of the Temurids, under Temur the city became a regional center, but already under his grandson Mirzo Ulugbek it received the status of a major cultural center in Central Asia. Even then, there were hundreds of mosques for which Bukhara is now famous. The 16thc. Bukhara became the capital of the Bukhara Khanate. Bukhara’s truly recovery began in the 16th century when it became the Shaybanid capital. Abdulla Khan united the Uzbek clans to maintain the Shi’ite Safavids (Bukhara’s rulers were Sunni), and artisans captured from the Safavid city of Herat (now in western Afghanistan) were instructed to rebuild Bukhara. Bukhara once again became a regional religious center, but this time to support Islam. Within the confines of the city were some 150 madrassas and nearly 300 mosques, each more elegant and better endowed than the last. The 18th century Bukhara was conquered by the Iranian shah. By the late 18th century, Bukhara was struggling economically as trade took a back seat to religion, and goods formerly traded along the Silk Road were now being transported along maritime routes, skipping Central Asia entirely. The beginning of the 19th centuries war for land between Bukhara and Khiva as well as the war between Bukhara and Kokand for possession of Dzhizak, Tashkent, Hodjent.  Bukhara’s rulers became known for their brutality and their religious extremism. The most famous of them was ‘the Butcher’ Nasrullah Khan, who murdered 31 relatives, including three brothers to rise to the throne in 1826, and later cut his chief advisor in half with an axe. Several British and Russian officers, diplomats and spies trooped through Bukhara in this period, including Alexander ‘Bukhara’ Burnes, and it is Nasrullah Khan who was responsible for the imprisonment and execution of the British officers Conolly and Stoddart.

The end of the 19thc. Bukhara became a vassal of Russia, the continual interference of Tsarist Russia in the domestic and foreign affairs of the Bukhara Khanate resulted in the complete dominion of Tsarist Russia over the Khanate. Reign of the last emirs of Bukhara Khanate. Russia gained trading concessions in the Bukharan emirate in 1868 and though the khan remained nominally independent, Bukhara was essentially a Russian territory. The Trans-Caspian railway arrived in 1888, physically linking the city to Russia. In 1920 General Mikhail Frunze marched his troops into the city. Large parts of Bukhara were destroyed during four days of fighting, the Emir fled to Afghanistan, and by the end of it, the Bolshevik flag flew from the Kalyon Minar. From 1924 Bukhara was a part of Soviet Uzbekistan. Mosques were converted into offices and workers’ associations, mullahs were killed and banished, madrassas became stables and storage yards. Rather than actively rebuilding the city in the Soviet-style, much of Bukhara was just left to decay, and it is for this reason that the old city is so well preserved. It was saved from 20th-century demolition crews, leaving later restorers much more original material to work with.