Lyabi-Hauz (or Lyabi Haus) is translated from Tajik as “around the pool” which seems logic as it is a square built around a pool in 1620 and shaded by mulberry trees as old as the pool (or even older). It is one of the most peaceful and charming places in Bukhara and has remained much alike compared to how it was hundreds of years ago, Lyabi-Hauz maintains its old-world style despite the evening pop music and family funfair feel. Lyab-i-Hauz is an old town center where a cozy pool is surrounded by Uzbek-style chaihanas blended with the western-style coffee shops together with old significant buildings. It includes three major buildings – a madrassah Kukeldash (1568-1569), Khanaka and Madrassah of Nadir-Divan-Begi. The pool’s size is only 36 by 42 meters, and its depth reaches 5 meters.

The history of Lyabi Hauz Square goes back to 1620 when the Grand Vizier (equivalent to prime minister), Nadir Divan Begi order to construct a centered reservoir. It was the greatest of the city reservoirs, supplied directly from the main canal or Shah Rud (Royal Canal) which still divides the old town. It was made with stone steps to allow the city’s water carriers to easily fill their leather buckets, regardless of the reservoir’s water level. Now the Lyabi Hauz is a pleasant place to stop by but during the time of the emirate, the dirty water supply was infected with a variety of waterborne diseases until the Soviets removed, restored, and refilled it in the 1960s. The mulberry trees that line its shore date from 1477. Lyabi-Khauz pond is one of the few Bukharan ponds that have survived.

The word “Kukeldash” means “milk brother” and Tashkent also has a madrassa with the same name. Kukeldash madrassah in Bukhara was built in 1568 – 1569 by Kulbaboy Kukeldash and it is the largest in Bukhara with the size of about 80 x 60 meters. It is created on a traditional diagram of the eastern type boarding school but for the first time in madrasa architecture the doors to the separate rooms were built facing the streets of the city instead of having only the entrance from the inner yard. The madrasah also includes a mosque, Darshana (a place for training), as well as total of 160 rooms. The architecture of the madrassah ignores the usual quality of madrassa construction works and one can see the haste, economy, and incompleteness. The design and domed overhead covers are the best in the architecture of the madrassah in the walkways that lead from the gate into the courtyard. The carved wooden doors of Kukeldash madrassah are also very beautiful. 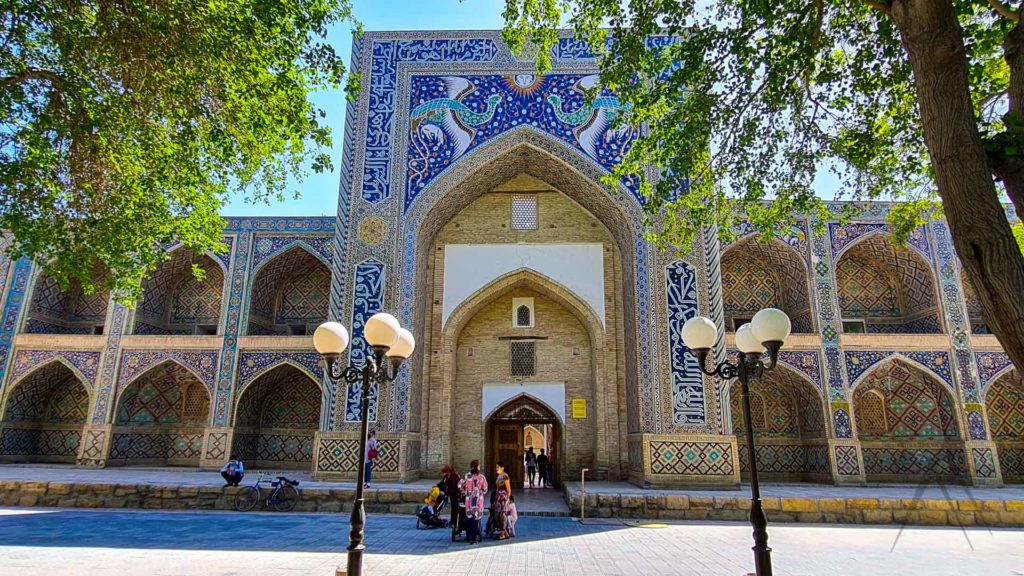 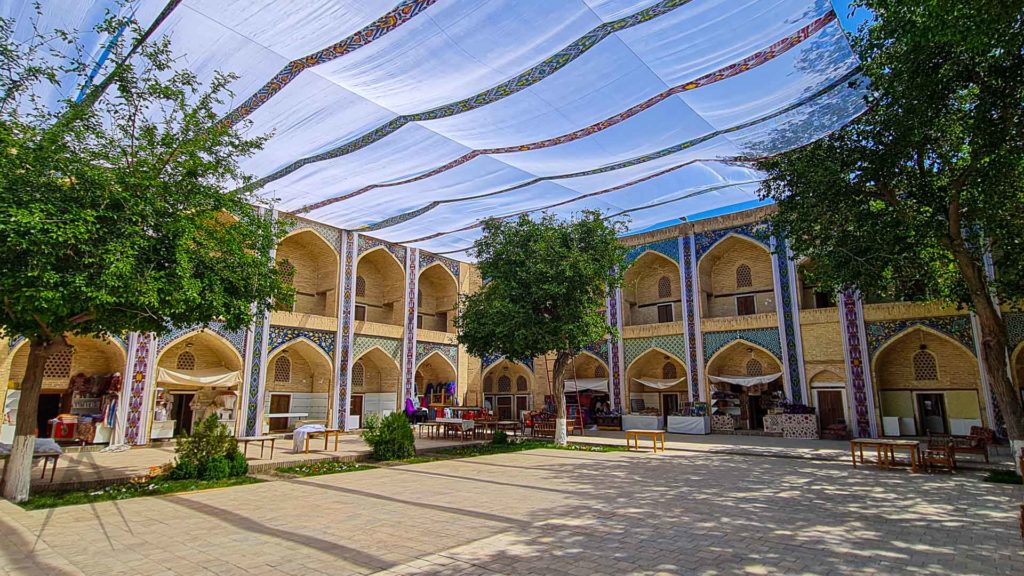 Kukeldash madrassa has great importance for modern history as Sadriddin Aini, who is one of the most famous writers of Central Asia, spent long times in this madrasa. Here is one of the local cells, he composed his great works. He died in the middle of the 20th century, but his work is immortal. He left behind a large collection of talented literary masterpieces. Today the name of the writer is praised within the walls of the madrasah. There is also a mall memorial dedicated to him with his personal belongings and even some of his handwritten texts are shown.

Vizier Nadir served at a courtyard of one the strongest and powerful representatives of Ashtarkhanid dynasty Imam Quli-Khan, who ruled in Bukhara between 1611-1642. The board of Imam Kuli-Khan was one of the most stable and relatively peaceful for the whole history of Ashtarkhanids in Bukhara. It was time when governors paid attention not only to constant wars but also to town-planning.

The entire history of the ensemble is closely related to the name of Nadir Sivan Beghi also written as Nadir Divanbegi. He was an influential grandee, Viser as well as an uncle of the Emir of Bukhara Imanm Quali Khan. It is believed that when Nadir Divan-Beghi built the Khanaka that carries his name, near the site of the structure was a large holding owned by an old Jewish widow. (that time in Bukhara was a large population of Jews.) 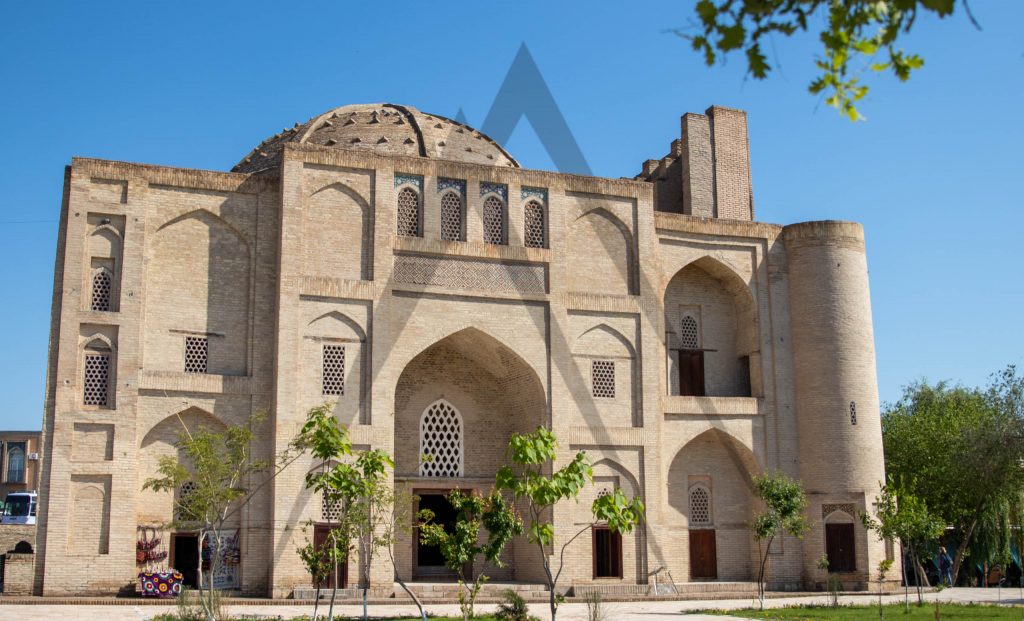 Nadir Divan-Beghi had chosen that this site would be the perfect place for a pond, however, the widow turned down his offer to buy the property. Then Nadir Divan-Beghi brought her before Imam Quli Khan in the hope that the Emir would force her into selling. The Emir of Bukhara ordered a committee of Mutfies to investigate it. However, these scholars in Muslim law decided that there was no legal way to purchase the property, other than with the widow’s consent since Jews had rights on a par with Muslims if they paid the poll-tax on non-Muslims. Therefore, Nadir Divan-Beghi had to build a small reservoir near the house of that stubborn Jew widow. But he dug an irrigation ditch, to his new pond in such a way that the water ran right near her house, although it was more expensive. Soon the water began to undermine the foundations of the widow’s house. When she came to Nadir Divan-Beghi for justice, he confirmed his readiness to buy her house for a fair price. But the widow rejected the money, laying down her conditions instead. She promised to give up her property if the Bukharan rulers would give her another piece of land with permission to build a synagogue (Jewish place of worship) In return for the widow’s holding Nadir Divan-Beghi gave her a plot of land, belonging to him, in a residential area, which later was named the Jewish quarter (Mahalli Kuma).

Madrassa Nadir Divanbegi erected in 1966 placed in the east of Lyabi Square. Originally, Nadir Divan-Begi commanded to build khanaka (a place for Sufis to reflect and rest), later caravanserai was added. However, at the opening ceremony, Imam Quli-Khan said that caravanserai was built in the glory of Allah, therefore the vizier had to reconstruct it into the madrasah. At the beginning of the 90s of the 20th century, the Nadir Divan-Begi madrasah has been listed among the architectural monuments protected by UNESCO.

The Nadir Divan-Begi madrasah is furnished in the style typical for all Muslim monuments of Central Asia. At the same time, the images of birds, animals and a human being – sun were also used in decoration, and it was uncharacteristic for Islamic monuments. The Nadir Divan-Begi Madrasah was built on the model of Sherdor in Samarkand but famous lions at the portal were replaced with mythical birds of happiness. 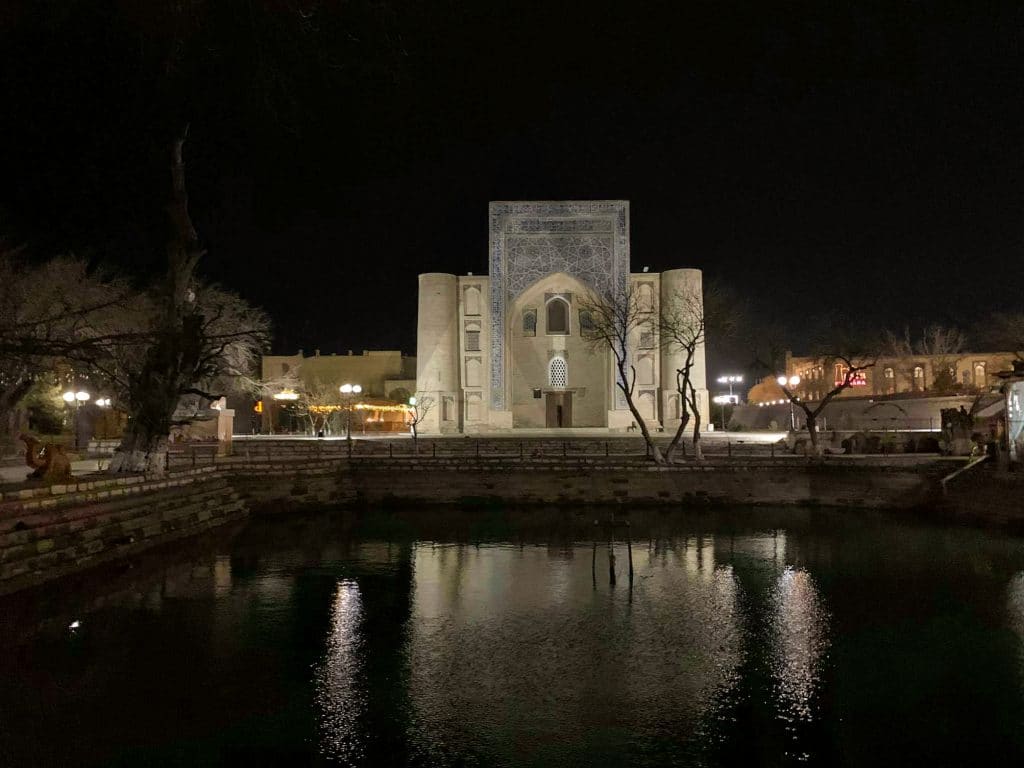 Nadir Divan-Begi Khanagha is located opposite Nadir Diven-Begi Medresse, on the west side of Lyabi-Haiz square. The Khanagha contains a central cruciform local mosque surrounded by a series of four hujra cells set on two floors that would provide accommodation to mendicant holy men. The top impressive gate of the Khanagha structure is reflected in the surface of the water, and it was constructed as a place where Sufi dervishes could stay and meditate. At the heart of the building is placed a mosque with a mihrab decorated with colored stalactites in crimson red, ultramarine blue, bright green and gold. Around the mosque are two storeys of hujras (cells) in which the holy men would have slept. Today the high portal sparkles and the richly decorated mihrab is swamped by souvenirs for sale.

Lyabi-Hauz complex is connected with a romantic legend of Nadir Divan-Begi. He was the minister of the Bukhara Emir that had decided to get married with a certain girl. He gave his bride only earrings as a wedding present which offended her as she was aware that her husband to be was born into a wealthy family and could easily afford a more generous present. After a few years he had built a mosque, madrasah and a number of other constructions. His wife became angry and told him that it was unfair to spend such huge amounts of money on the construction whilst giving her such a modest wedding present. Her husband responded: “My dear, look in your jewelry box” and when she opened the box she could see only one earring instead of two and thought she was robbed. Nadir Divan-Begi revealed her then that all the constructions he had built were constructed with the price of just one earring. “You have not appreciated my gift, then appreciate what was built with this gift,” he told his wife.

The monument to Nasreddin Afandi is a bronze statue riding on a donkey that was established in 1981. The monument stands on the east side of the square near the Lyabi-Hauz madrassah. Khoja Nasreddin is a folklore character of the Muslim East and some of the Mediterranean and the Balkans, the hero of short humorous and satirical miniatures and anecdotes and sometimes everyday fairy tales. There are various stories about his existence in real life and even archaeological evidence in specific places. However, still no precise information about his existence nor a specific date or place of birth has been found for Nasruddin.

In 2020, an application was proposed for inclusion in the UNESCO list of the tradition of retelling the stories of Khoja Nasreddin as a common object of Turkey, Azerbaijan, Kazakhstan, Kyrgyzstan, Uzbekistan, Tajikistan and Turkmenistan.

Locals love this character and you may notice how the monument is always surrounded by people most of the time. There is a belief that if you put a child on his donkey, then his/her life will be filled with joy and positive emotions. It is one of the most popular places for photos among the locals. 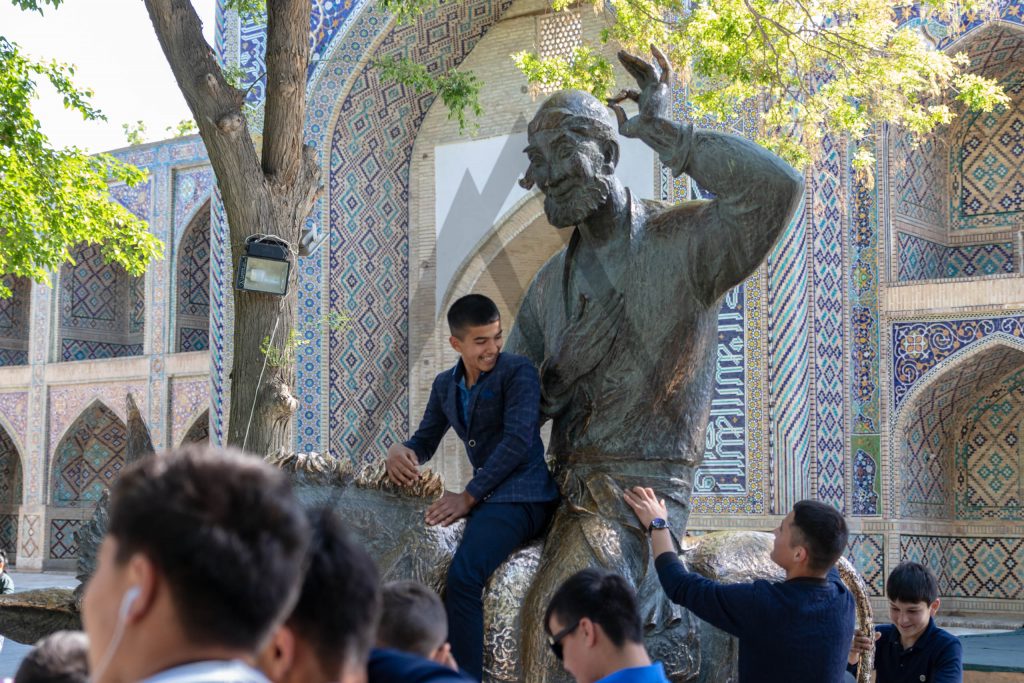