Khudyar Khan Palace is Kokand’s most remarkable sight as well as one of the most glittering royal residences in central Asia. This majestic and notable building serves as a reminder of the last ruler of the Kokand Khanate, Khudoyar. Khudyar Khan Palace also known as a Kokand Urda and carried the nickname the “Pearl of Kokand”, is a palace befitting a glorious ruler. This truly impressive and luxurious structure is perceived by UNESCO today.

According to historical records, 29 khans reigned in Kokand within 150 years, but the most famous among them was the last khan, Khudoyar-Khan.

He was the most prominent ruler of Kokand in 1845 at the age of 12, and lost the seat and won it back again 4 times before 1876, the period of the expansion of the Kokand Khanate by Russia.

In 1865 Russia annexed Tashkent, the former possession of Kokand khanate. However, by that time the relations between the khan and his Ferghana people have become not satisfactory. So less than 2 years after building his mighty palace, he was kicked out of the country by his own people. 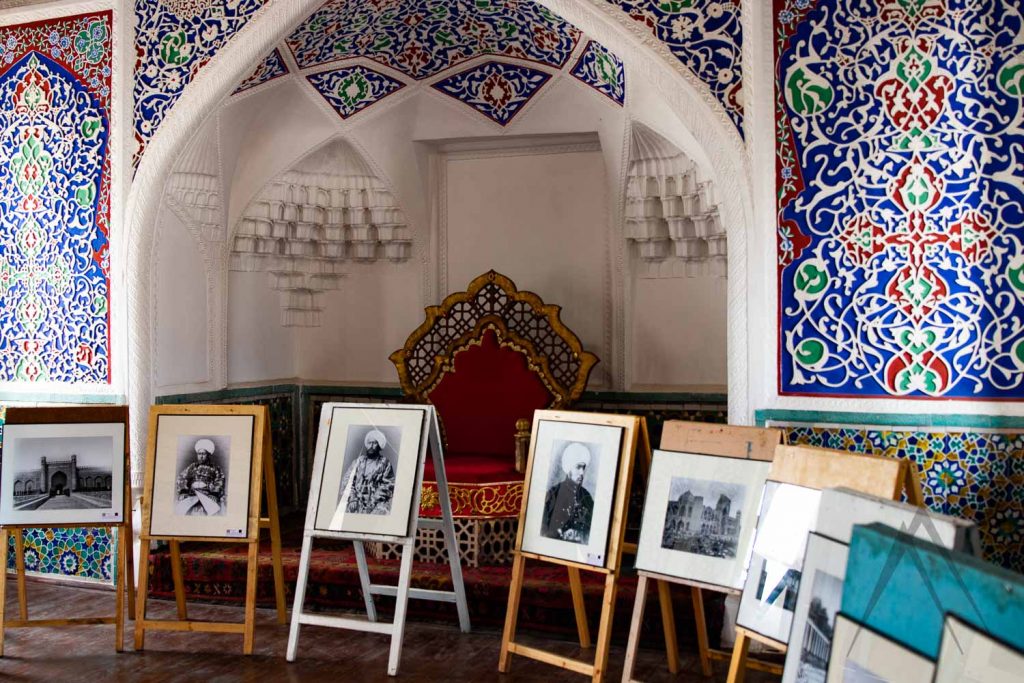 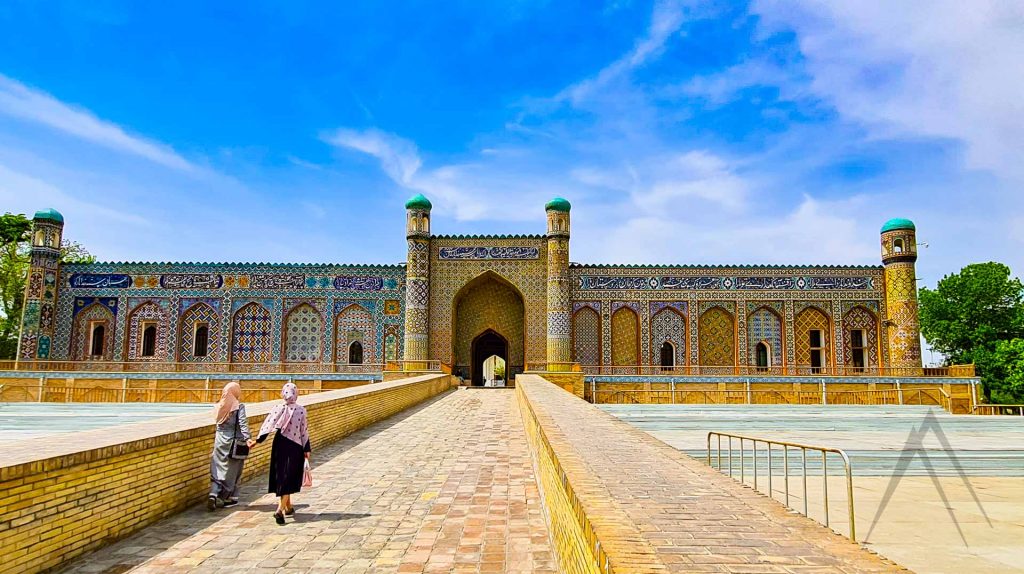 The reason is because the khan stopped paying compensation to his military leaders and soldiers, and the unpleasant manner of peasants and townsfolk caused civil unrest and numerous rebels which were suppressed with brutal severity.

The year 1875 became the last year of Khudoyar-khan’s reign. He had to escape the country and to seek asylum in Russia. Soon after that, facing no strong resistance on the part of the local people, the Russian troops took Kokand, and in 1876 Russia annexed the Kokand khanate. Later, the Khan escaped to Afghanistan with his family and his fortune.

The palace building, indeed, held 4 hectares, was 138 meters in length and 65 meters in width. The palace was constructed on a three-meter-high platform with a ramp leading to the main entrance, at the bottom of the ramp there once were cast-iron and copper cannons. On the portal, between two towers above the large fretted entrance gates carried the Arabic inscription made of majolica tiles, which says “Seyid Mukhammad Khodoyar-Khan-the great ruler”.

The palace was surrounded by an impressive carved stone fence. On the right flank of the palace, there was constructed a faceted minaret faced with ceramic tiles whose colors imitate Ferghana abr silk. The construction of this magnificent palace, consisting of 7 small inner courtyards surrounded by buildings, was carried out under the guidance of architect Mir Ubaydullo. The best craftsmen from all over the valley were involved in decoration works, the ceramic tiles for façade decoration were manufactured by the craftsmen from Rishtan – the ancient ceramic center. 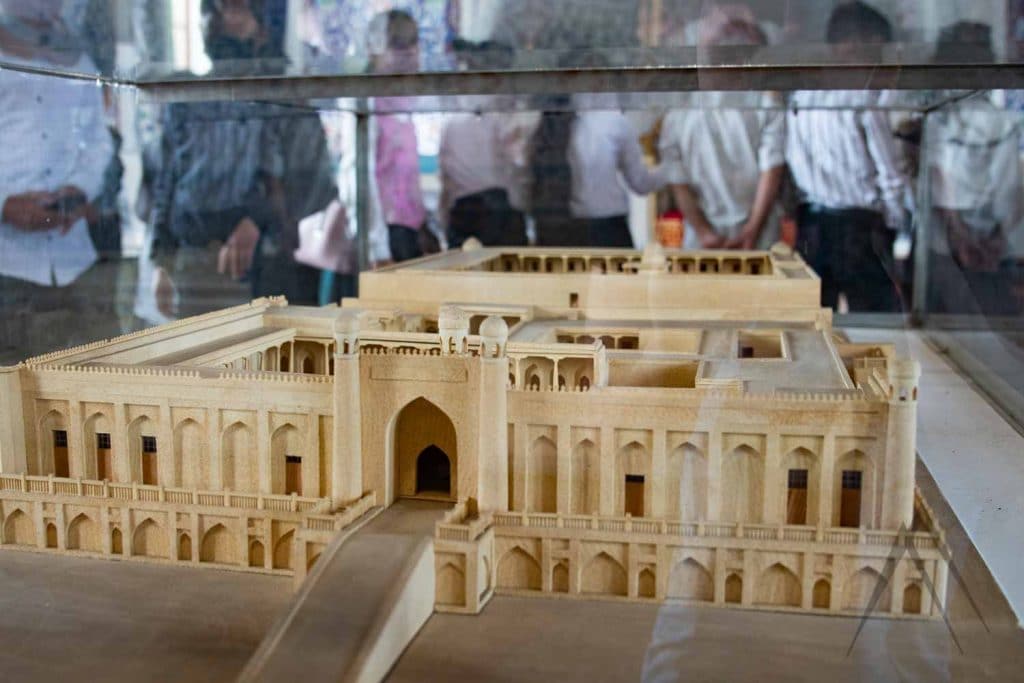 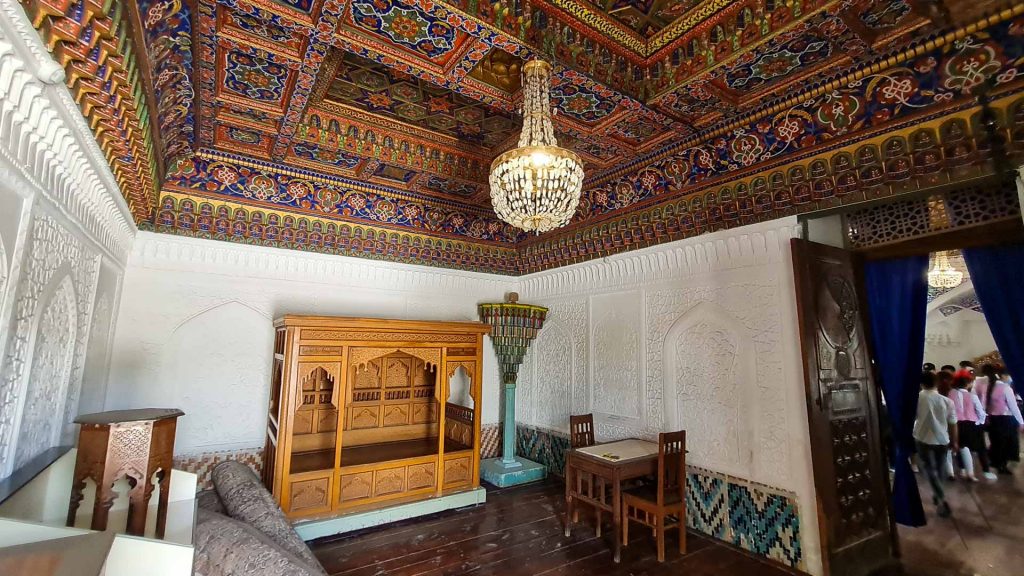 The palace highlighted 119 rooms that were decorated with the lace-like carving on ganch, decorated tempera paintings, gold-plated alabaster cornices. The most stylish premises were the throne room and waiting room. Adjoining them were the treasury, depository and arsenal. Furthermore, there was also a unique hall where khan administered justice to his subjects. One of the courtyards housed the harem for 40 concubines which means that nearly half of the palace was dedicated to housing his harem which the Russians demolished in 1919.