Margilon is the city of highly praised fabric with a population of around 145,000 and its Yodgorlik Silk Factory. Uzbekistan is the world’s third-largest silk producer, and Margilon is the traditional center of the industry. Much of the silk you see for sale in Samarkand and Bukhara is made in factories here. Like those better-known cities, the population of Margilan is also primarily ethnic Tajik, which gives it a slightly different feel to other places in the Fergana Valley. It’s only a small place, but well worth a few hours of your time.

Margilan was a major Silk Road stop by the ninth century, although local legend continues its history back to Alexander the Great. On his arrival, he was given “Murgh” means chicken and “Nan” means bread, from which the town grew its name. For centuries its merchant clans, key players in Central Asia’s commerce and silk trade, were said to be a law unto themselves, even in the closing decades of Soviet rule, this was the heart of Uzbekistan’s black-market economy.

In recent years mass machinery has transformed the handicraft of sericulture to make Margilan the heart of Soviet silk production, rolling out millions of meters of the bright rainbow every year. Like much of the valley, Margilon is also one of the country’s most devoutly Islamic cities.

The town enjoys a reputation as a traditional stronghold of Islam, with deeper roots than further west. In the 19th century, Margilan had several madrassahs and over 200 mosques, but many fell to rampaging Bolsheviks. Official atheism kept the faithful indoors, until independence released their savings into a flurry of mosque-building, making up for lost years. 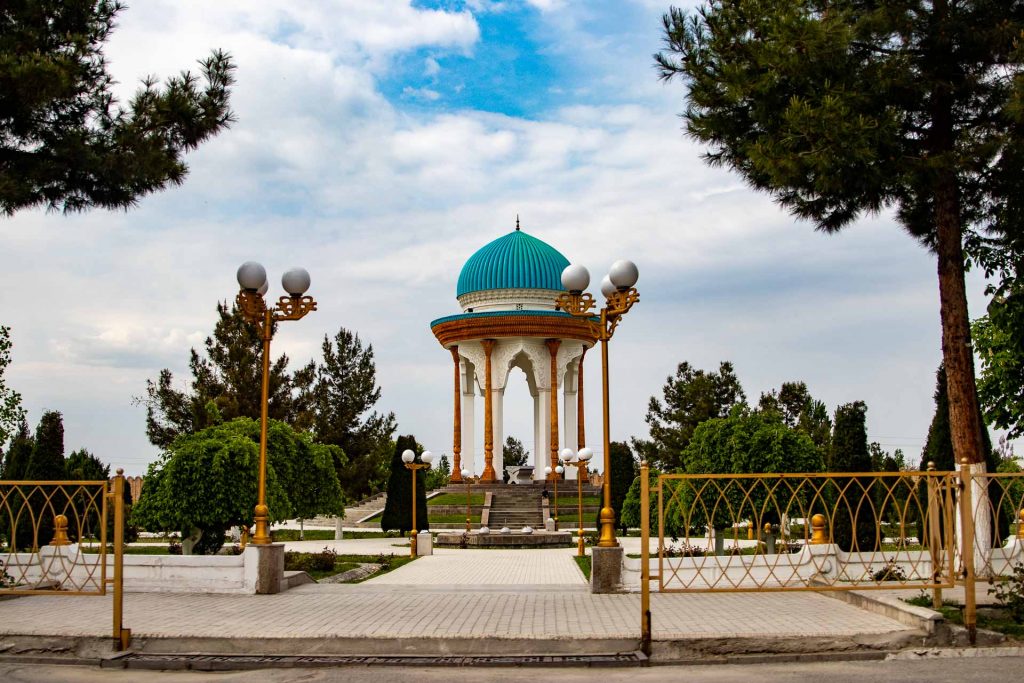 Margilan museum is located just next to the bazaar in the city center. This small museum focused on fabric production and national decorations, clothing, household items, wooden items, jewelry. The first floor presented the clothing decorations as well as the equipment for fabric production while in the second floor displayed historical artifacts. 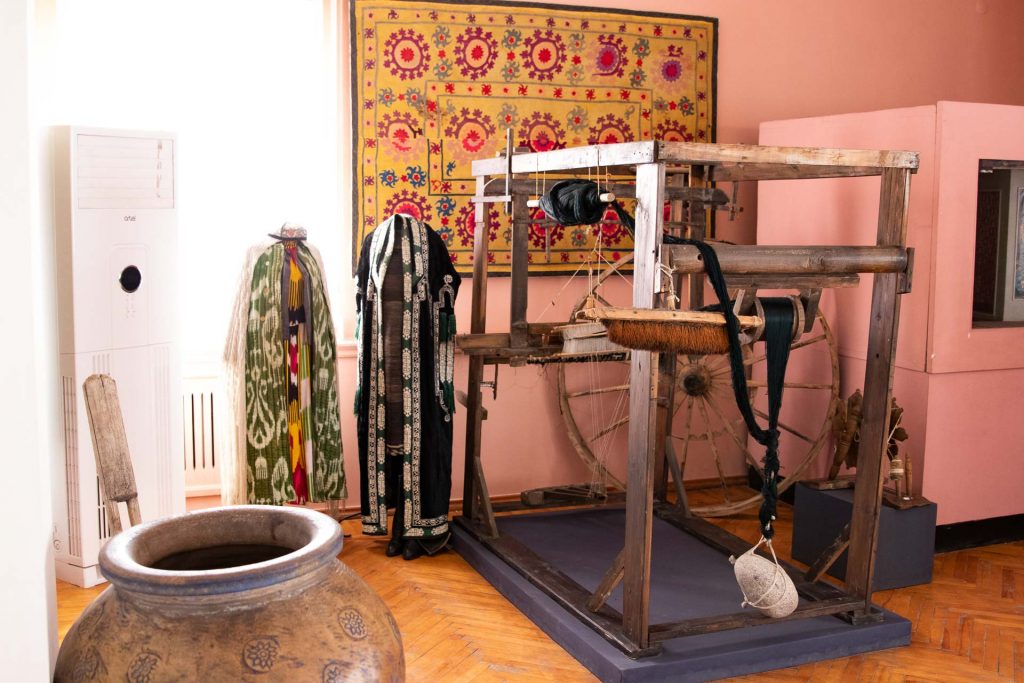 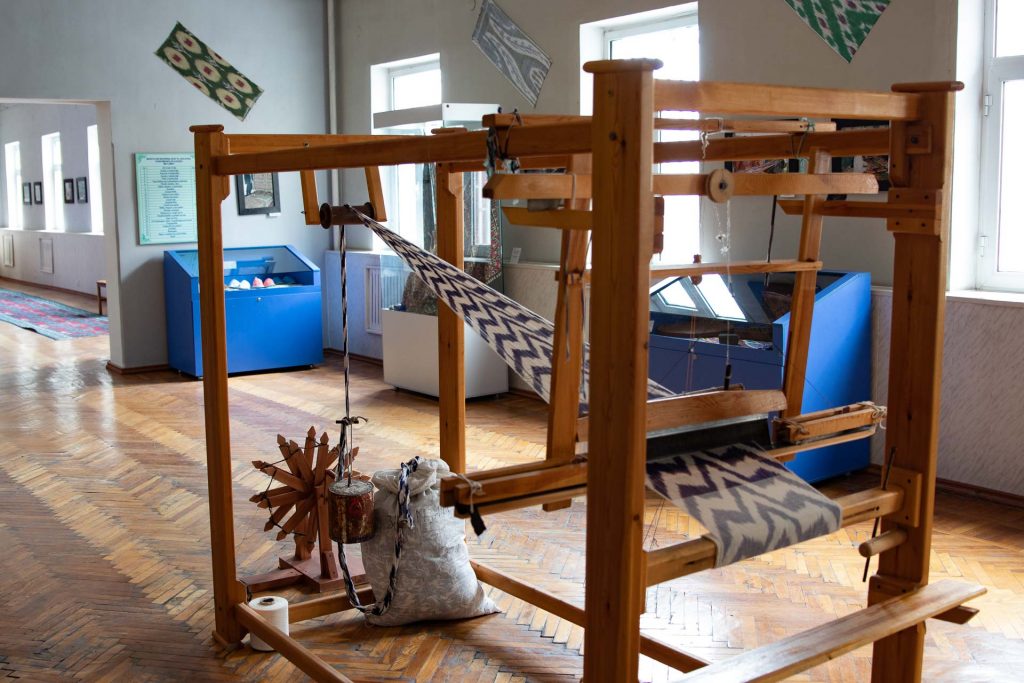 Margilon’s fantastic Sunday Kumtepa Bazaar, 5km west of the center, is a must experience for visitors to Margilon. It’s a time capsule full of weathered Uzbek men in traditional clothing exchanging solemn greetings and gossiping over endless pots of tea, with hardly a Russian or a tourist in sight.

Yodgorlik Silk Factory has a amazing tour where you’ll observe traditional methods of silk production, unlike those used at the city’s increasingly moribund mass-production factories). The entire process is on display, from steaming and unraveling the cocoons to the weaving of the dazzling khanatlas (hand-woven silk patterned on one side) fabrics for which Margilon is famous. It’s almost all done without electricity, just as it was 1500 years ago. The tour is available in English, French, Russian or German. There is also premade clothing, carpets and embroidered items for sale. The tour fee can go towards purchases in the shop.

Pir Siddiq is the heart of the complex that was built in the 18th century. The complex was erected in memory of Pir Siddiq, a great holy man, who miraculously escaped from pagan chasers in a cave. The most significant building of the complex is Pir Siddiq’s mausoleum, erected right over his grave in 1742.

This mausoleum is striking for the lack of a dome, which is rare for Islamic architecture. The mausoleum was originally designed with a dome, however frequent earthquakes led to the beginning of its destruction. Thus, it was eventually replaced by a flat roof so that the smithereens wouldn’t damage the tomb. The mausoleum has beautiful decorative elements such as fine wood carvings, delicate mosaics, calculated shapes and patterns, perfectly complementing each other. 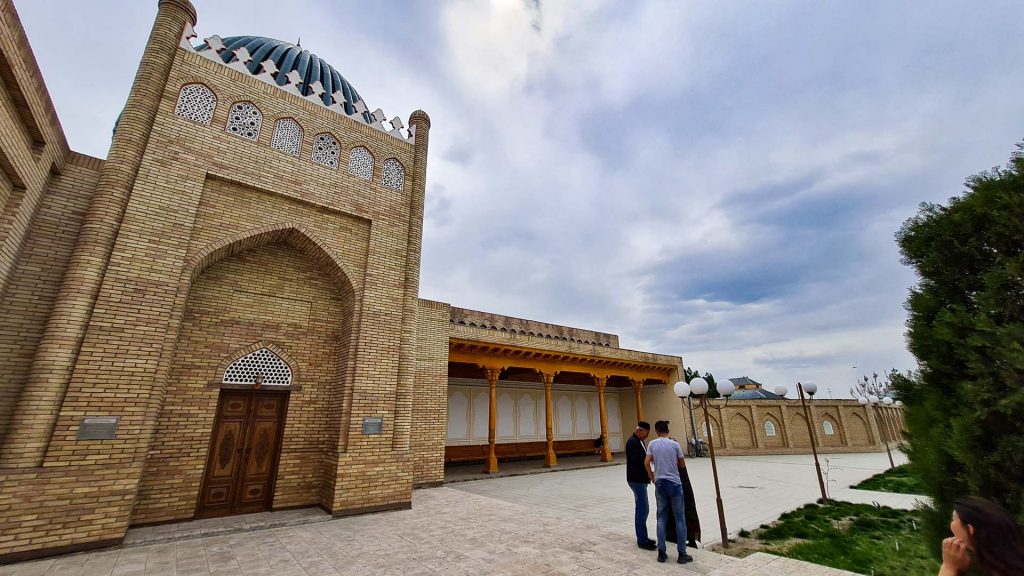 There is also a mosque, where believers gather for prayer, while kids feed the birds. First what you notice arriving at the Pit Siddiq memorial complex is birds, over the mausoleum and in the yard. 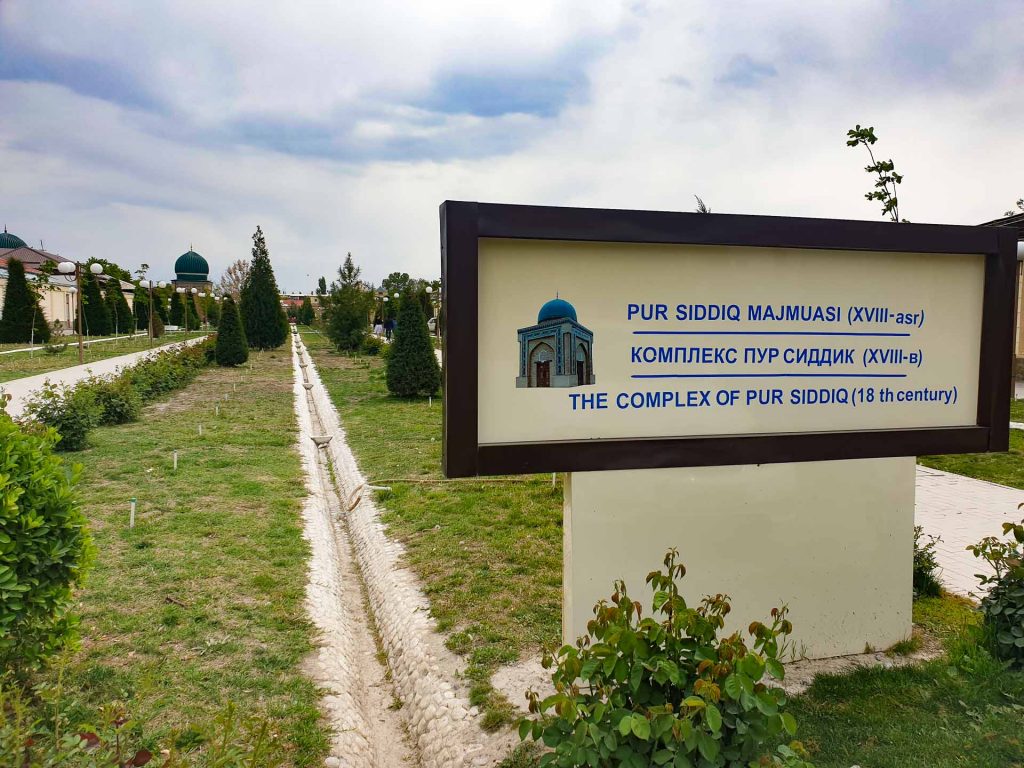 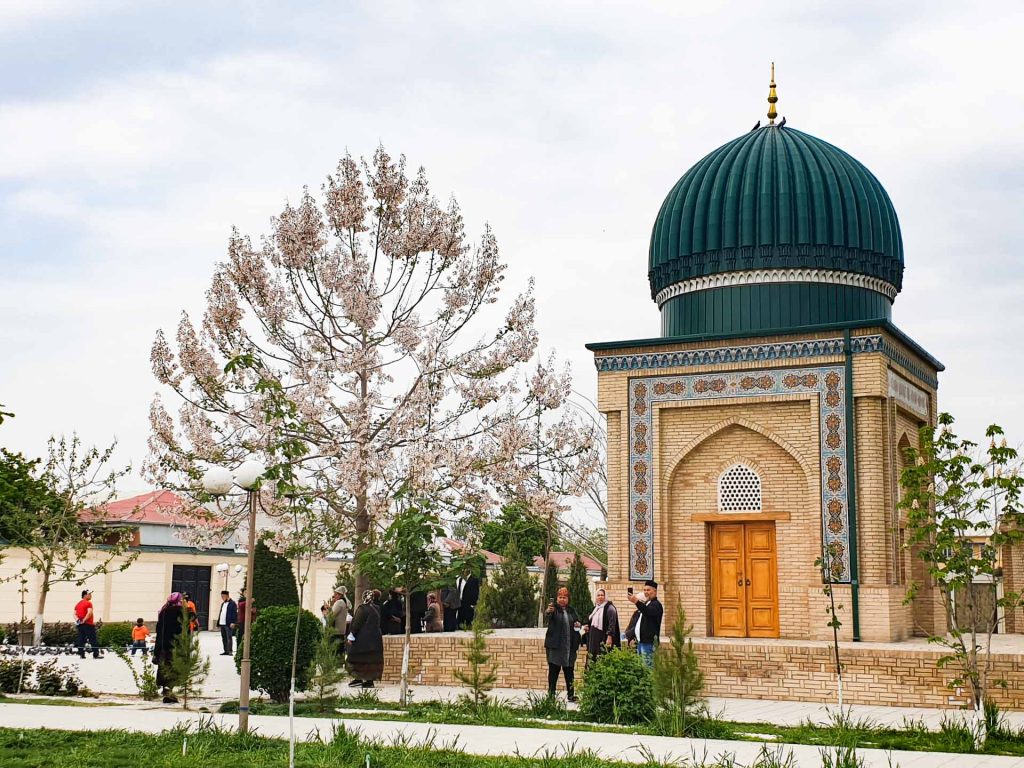 The Said Akhmad-Khoja Madrasah was built at the end of the 19th century. It was shut during Soviet rule and after the collapse of the USSR when Uzbekistan gaining independence the madrassah renewed its primary purpose. Today the complex continues operating as a madrassah and the mosque and it also houses a national handicraft center.

The madrassah’s appearance resembles the other similar religious structures of those times, built in the Fergana Valley. The madrasah itself is a one-story building, the square courtyard is surrounded by 26 hujras. In its north-western, yard stands, an asymmetric mosque with a one-sided aywan. 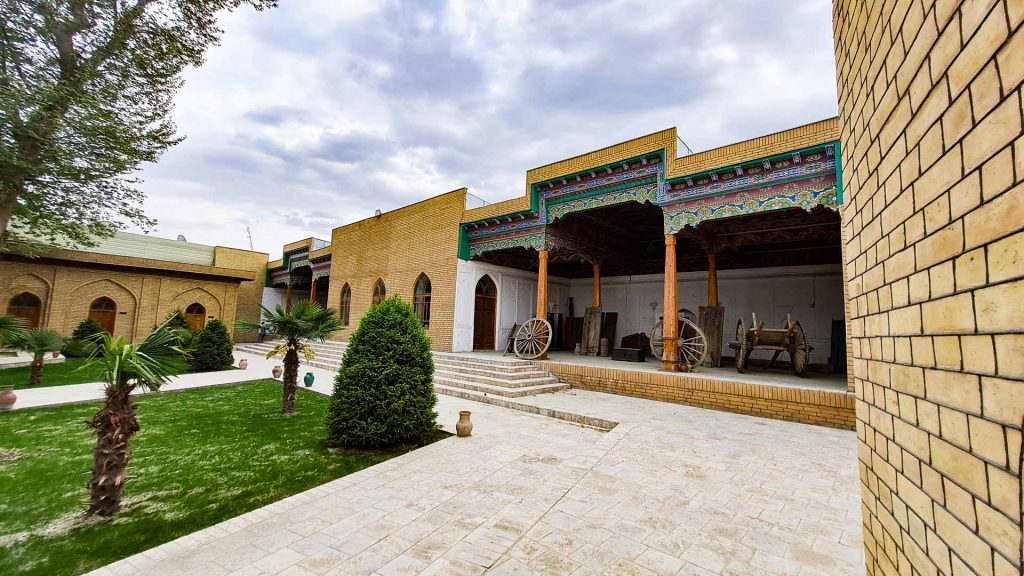 The complex’s design combines both oriental and European styles. The roof of the lobby is divided into red and green stripes, painted with flowers and curved shoots. These magnificent colors of the madrassah attract residents for the wedding pictures. Today hujras are occupied by the masters, who engage in silk weaving as well as processing precious stones, metal and wood objects. 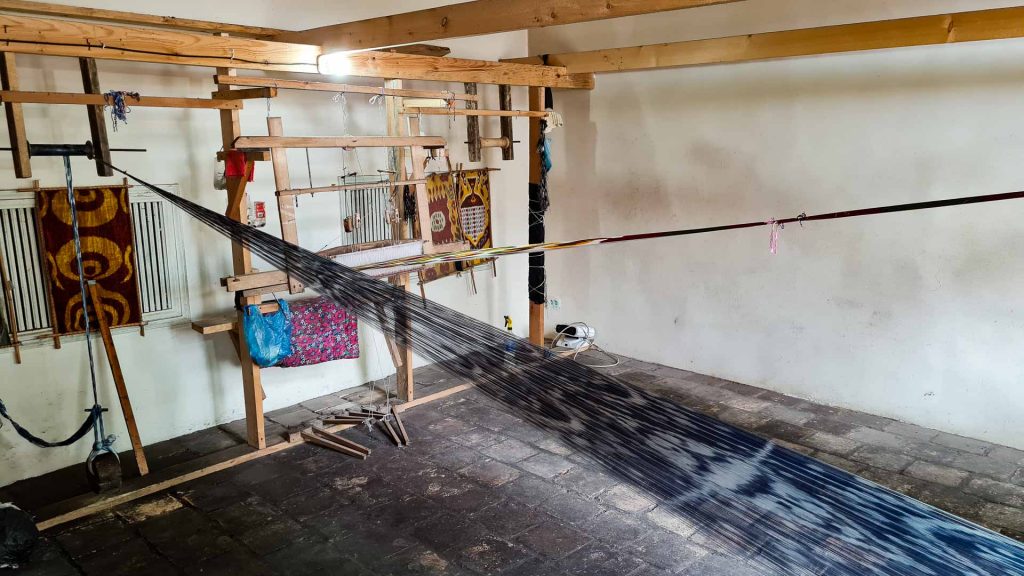 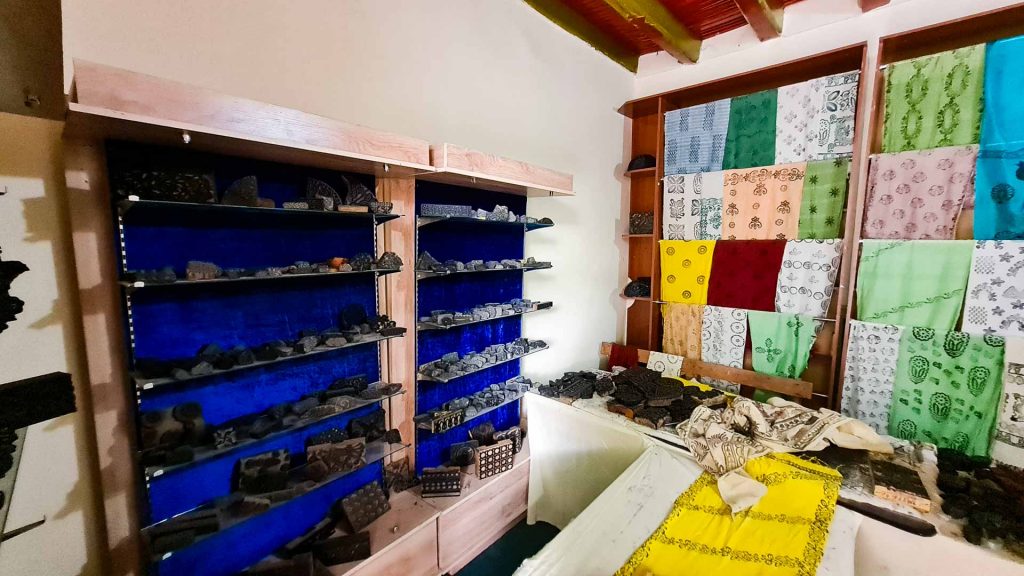 Next destination in Fergana Valley