Ugam-Chatkal National Park is the national pride ecosystem of Uzbekistan and conveniently only an hour drive away from Tashkent. It was established in 1990 based on the Chatkal Biosphere Reserve and is mostly located in the Greater Chimgan mountains. Since 2017 it has been included in the UNESCO World Heritage List. The area of the park is 668 350 hectares. The Chatkal Mountains stand out from the steppe 80 km northeast of Tashkent, presenting one of the most scenic landscapes of the Uzbek nature with thousands of flora species and hundreds of fauna as well. Ugam Chatkal park is squeezed between two neighbor countries sharing the vast mountainous area with Kyrgyzstan (Besh Aral state Reserve) and two Natural Reserves  with Kazakhstan (Aksu-Zhabagly and Sairam-Ugam). Together they form a large network of protected nature reserve.

Chatkal National Park is not only mountain forests and steppes but also alpine meadows, high-mountain glaciers and several climbing trails. The reserve zone of the park is closed for free visits by tourists, but a large portion of the park is open for tourism. The open part includes trails leading to valleys, rocky areas, gorges and mountain peaks. Furthermore, petroglyphs can also be found on the banks of the Tereksay river. The reserve is a perfect recreation getaway destination for the Tashkent and Shymkent residents who come here for hiking, climbing, picnics, rafting in the fast-running rivers, or heli-skiing at rock-bottom rates. The best season for summer activities is from May till July. Skiing season varies yearly depending on the snow conditions.

From December to March, the Chimgan Ski Resort gathers ski enthusiasts from Tashkent and visitors of the capital. The majority of skiers take the chairlift up to Great Chimgan (3,309m), the highest peak in order to race down the Kumbel track, but it is also possible to fly up to 3,000m and be deposited on virgin powder snow. A day’s lift pass is only US$10. Ski and snowboard gear is available to hire. In the summertime, Chatkal Park becomes an ideal trekking ground. There are many routes suitable for all degrees of fitness: serious trekkers should take a guide and a border permit to reach the glaciers of the Pskem Mountains alongside the Kyrgyzstan border, but there are also opportunities for more casual trekkers with a day or two to spare.

Chatkal is a powerful river that originates from the southwestern slopes of the Talas Alatau ridge in Kyrgyzstan with a length of 217 km. On the territory of Uzbekistan, several tributaries flow into the Chatkal, including Akbulak, Kazanaksay, Paltau and Chukuraksa. Waterfalls, cascades of rapids, whirlpools and rocky gorges all offer physical challenges, but the landscape is diverse and the route is filled with excitement. The autumn months are the ideal months for rafting.

RAFTING: The first canyon contains a perilous waterfall, with two steps, each of around 4m. It is followed by a 100 m stretch of rapids, and the confluence of the Chatkal and Ters rivers. The rapids here are considered one of the most difficult parts of the route. In the second canyon, the stone walls tower high above the river on both sides. The third canyon is narrow; the river winds through a corridor 200-300m high, the rocks pitted with grottoes and caves. Cornices overhang the water, in places blocking out the sky. The riverbed narrows to just 6 m wide but then opens out again to floodplains of forest and meadow. Peak Chatkal (4,503m) rises majestically in the distance. Crossing the fourth canyon is relatively straightforward, but you quickly enter the most dangerous rapids of the trip, situated in the fifth canyon. The rocks narrow into a corridor known as ‘the diaphragm’, after which the river calms and widens. There are sandbanks and rock beaches on both sides of the river here. The final stretch of rapids is after the fifth canyon at Aurahmat. They occur only when dams upstream are opened for irrigation.

Paltau is a mountain river (Sai) in the Bostanlyk region of the Tashkent region and a tributary of the Chatkal River flowing directly into the reservoir Charvak. The valley of the Paltau River in the lower and middle parts is flat. About 4 kilometers from the mouth, the river makes a sharp bend. Here, among the rocks, there is also a waterfall called Paltau. The sources of the Paltau River are located in the spurs of the Koksuy Range, near the state border with Kyrgyzstan. Paltau flows into Chatkal reservoir two kilometers upstream from the road bridge, not far from the town of Obi Rakhmat. The tributaries of the Paltau are mostly dry in the summertime. The slopes of the Paltau river gorge are overgrown with mixed forest – birch groves, fruit and berry trees. Many flowers and medicinal herbs grow along the slopes of the gorge. In the valley of the Paltau River and its tributaries, you can also pick mushrooms but be sure to have a local guide to make sure you are picking the good ones and leaving out the possibly poisonous ones.

Paltau or Pulat-tau, which means “Iron Mountain” as these places are rich in iron ore. In the Middle Ages there was a mine and the remains of smelting furnaces are still preserved. Geological explorations were conducted in the Paltau gorge in the 1930s and 1940s resulting with some fluorite deposits but the project turned out to be unprofitable. Access to the Paltau valley is possible currently only with special permits due to the proximity to the state border. You can obtain an entry permit through the local travel agencies.

The Obi-Rakhmat grotto lies in the valley of the Paltau River. The archeological team accidentally discovered the site while examination of the flooded area of the future Charvak reservoir in 1962. The cave age is estimated to at least 50,000 years. During the further study, the team presented about 500  stone items from the cave.

The cave is about 9m long, 20m wide at the entrance and 11m and lies at an altitude of 1250 m above sea level. In the site were found numbers of artifacts such as teeth on large scales, unidirectional blades and flake shafts (mostly retouched blades and retouched pointed blades, while other common types include incisors, atypical end-scrapers and many more. The artifacts found in the Obi-Rakhma have common features both with artifacts of the Late Middle Paleolithic and with elements of the Early Upper Paleolithic of Southwestern Asia and Mountain Altai. It appears that the Upper Paleolithic in Altai arose as a result of the local culture of the Middle Paleolithic, formed on the territory about 100-50 thousand years ago.

The path to the cave leads you through the charming rock formations, located above near the Paltau channel, and just below the houses of a small farm. Possibly, first, you will see the big holes made by the archaeologists, digging a deep ten-meter hole and about 3×5 wide, to go down you might need a rope. Hiking up you will notice the entrance to the cave. At first glance, you can feel the chaos of the abundance of bones here of a mass grave than centuries-old layering. Right in the center, below, on the ruins from the crumbling wall, lie in a heap, someone collected human remains from jaws and several large bones.

The powerful and easily accessible waterfall of Paltau is located in the Paltau track. Its height is about 35-40 meters. Previously, it was called the “Academic” waterfall, because there used to be a rest house of the Academy of Sciences of the Uzbek SSR while the excavations of the Obirakhmat grotto were carried out. Paltau waterfall’s source is mountain Sai and the Chatkal River, which begins high in the mountains, in the spurs of the Koksuy Range located near the border with Kyrgyzstan. You can reach the waterfall from Tashkent by a good dirt road and a trail passing from the Tashkent-Burchmulla highway going to the village of Paltau.

Uzbekistan has some scenic mountain lakes, many of them are placed in hard-to-reach areas. Among them are the Lower and Upper Urungach lakes, also known as Jade lakes for their enormous beauty. Urungach lakes are placed in the Ugam-Chatcal National Nature Park in rather hard to reach territory about 160 km from the Tashkent. There is a good trail leading to the first lake.

The water on the lower lake is very cold. The scenes are marvelous, peace is all around and the bright beauty of the place just fascinates the view. The lakes formed in a natural way after rocks collapse that created a natural dam. The level of the small lake differs greatly depending on the time of year. In the springtime, the lakes are full and look brighter whilst after the hot summer they lose a lot of water and you almost can not recognize this same lake in the fall. Since the area is quite close to the Uzbek-Kazakh border, you need to obtain permission in advance.

Another pearl of the Ugam-Chatkal National Park is the Badak Lake, which is located at an altitude of 1700 meters above sea level. The name Badak, Turkic origin (baytak) means “wide”. If you climb the dam, you can see that the lake stretches from east to west for more than a kilometer and is more than 200 meters wide. The lake has an interesting phenomena during summer as it changes the color depending on the time of the day. In the early morning, it is blue-green, towards midday it becomes bluish, and at sunset it becomes silvery.

Badak is also one of the largest water storages after the Lake Bolshoy Ihnachkul. Badak lake is also associated with the legend of the “Deva” who lives in the lake and drags people away underneath the water. For this reason, the superstitious locals avoid swimming in the lake. 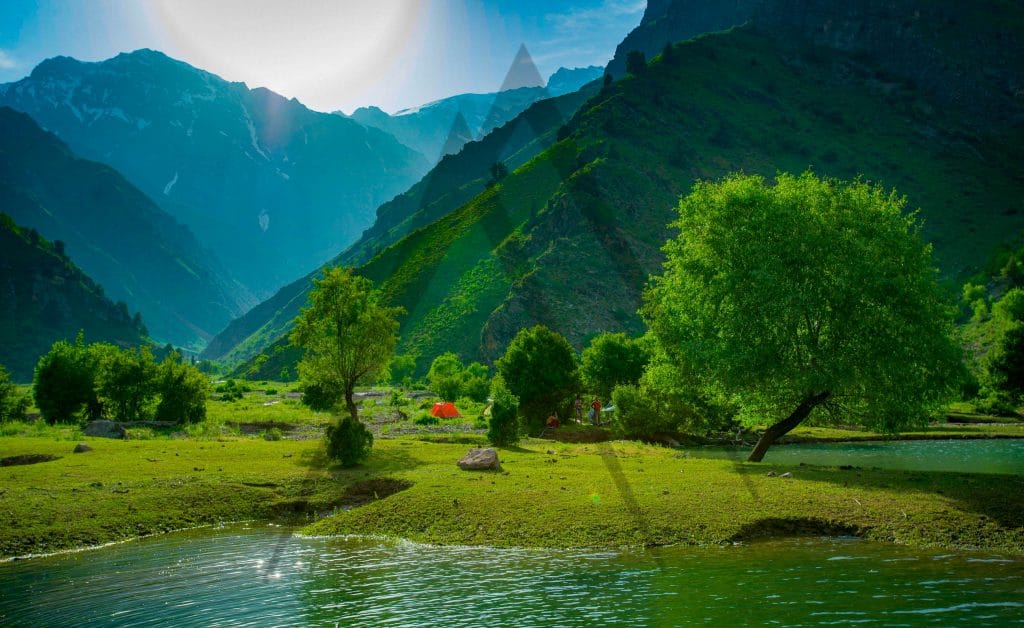