The historical city of Uzgen is located 55 kilometers Northeast of Osh. Today Uzgen is a fairly large city by Kyrgyz standards with around 50 thousand inhabitants across the ridge from Jalal-Abad. About 90% of the population of Uzgen is of Uzbek ethnicity.

The city is divided into Upper and Lower Uzgen. In the Upper Uzgen are the enterprises such as bazaars and shops. The lower areas are considered more as sleeping areas. Despite the fact that two rivers flow near the city – Kara Darya and Iasi, locals experience a constant shortage of drinking water. The city water supply channel provides enough water only to 60% of the population and drinking water is therefore taken from domestic columns and open sources where the quality is not good.

In the 13th century, Uzgen was demolished by Genghis Khan and only the Uzgen Tower (Minaret) and three mausoleums were preserved. The minaret here is the closest relative of the Burana tower in northern Kyrgyzstan. Afterwards, Uzgen was a part of the Kokand khanate, until the Russian Empire took over this region and finally turned into the Soviet Union.

What to do in Uzgen

The monuments of Uzgen are called the “encyclopedia of the Karakhanids culture” because one can observe progress stages of architectural forms as well as of the decorative art of the 11-12th centuries.

The Uzgen minaret was built in the middle of the 11th century, during the dawn of the Karakhanid era. The minarets were designed so that the mullahs at the appropriate time, with their strong and loud voice, would call the faithful to perform religious rites. 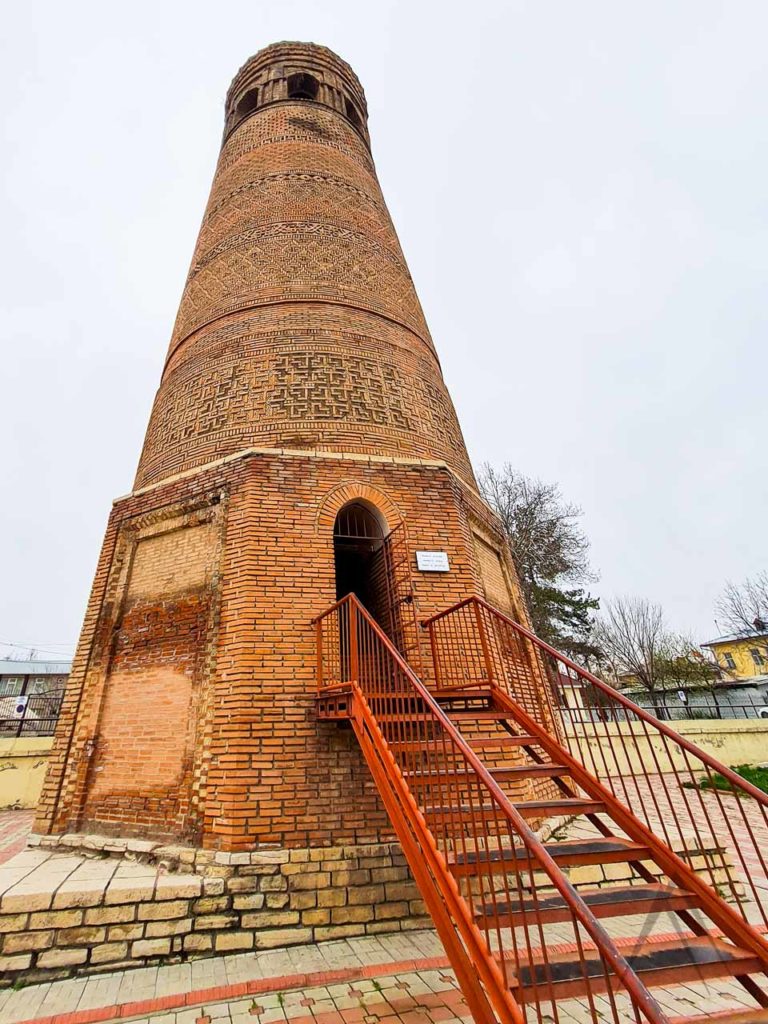 The mausoleums of the Karakhanid rulers are located next to the minaret at the same site. Their facades are facing southwest, forming one area. In the south, the square is terminated by the Kara-Darya river slope, and in the south-west it passes into the ancient necropolis of the XIII-XIV centuries.

According to the local legends the rulers of the Karakhanid dynasty are buried in these mausoleums. However, the legends do not match with scientific facts. After studying the inscriptions on the buildings, scientists found that one of the mausoleums was placed in honor of “a member of the Ilekov Tugrul Kara Hakan Hussein dynasty, son of Hassan, son of Ali, who died on Wednesday of the fourth month in 547.”

Uzgen is famous for its exceptional type of rice named “Devzira”. This reddish-brown rice is grown throughout the Ferghana Valley, but it is believed that Uzgen has the best climatic condition with the mineral composition of the soil, for this specific rice. The landscape is also well suited for the installation of rice terraces and the ancient traditions of rice cultivation are ideally combined.

Due to this combination, dishes prepared from Uzgen rice are easily digested even though they are often quite fatty. “Devzira” is the most expensive and considered being an elite rice and is the best rice for preparing the famous Osh / Uzgen /Fergana style plov.

how to get to uzgen?

The easiest way is to fly to Osh airport, and from there go by car to Uzgen. Travel time is an hour and a half. From Osh city center you can take a marshrutka or shared taxi from the entrance to Noviy Avtovokzal (New bus station). Marshrutka goes every 40 minute and will cost 50 som and shared taxi goes anytime when the car is full, it will be about 100 som.

From Bishkek you may get a shared taxi only with 4 or 7 seats from the west bus station or next to Osh bazar to Uzgen for 1300 som per person. Another option is taking a taxi that goes to Osh and get off on the way to Uzgen or ask to drop you there. You may negotiate about the price with the driver.