osh - The capital of South Kyrgyzstan

Osh city is one of the largest and most densely populated cities in Kyrgyzstan, it is also officially called the “Southern Capital”. Osh is located near the northeastern edge of the Pamir-Alai and extends to the southwestern side of the Tien Shan mountain range. The city lies at the Eastern end of Fergana Valley about 900 m above sea level and is mostly famous for Sulaiman Too mountain located at almost at the center of Osh.

Osh has seen huge empires of the history, caravans of the Great Silk Road, crowds of travelers, many different cultures, and despite all of this, has managed to preserve its unique spirit of the Muslim East. Osh is the second largest and the oldest city in Kyrgyzstan and is estimated to be more than 3000 years old. Premier it was mentioned in records of the 9th century. Furthermore, Osh is the second biggest city with a population of approximately 300 000.

Most of tourists usually pass through Osh as a transport hub to reach the high-altitude Pamir Highway in Tajikistan or to visit the more well-known Silk Road cities of Uzbekistan. If you have the time, stop for a day or two. This city can charm tourists with its diverse religious monuments, colorful and lively bazaars and a mixture of ethnic groups. 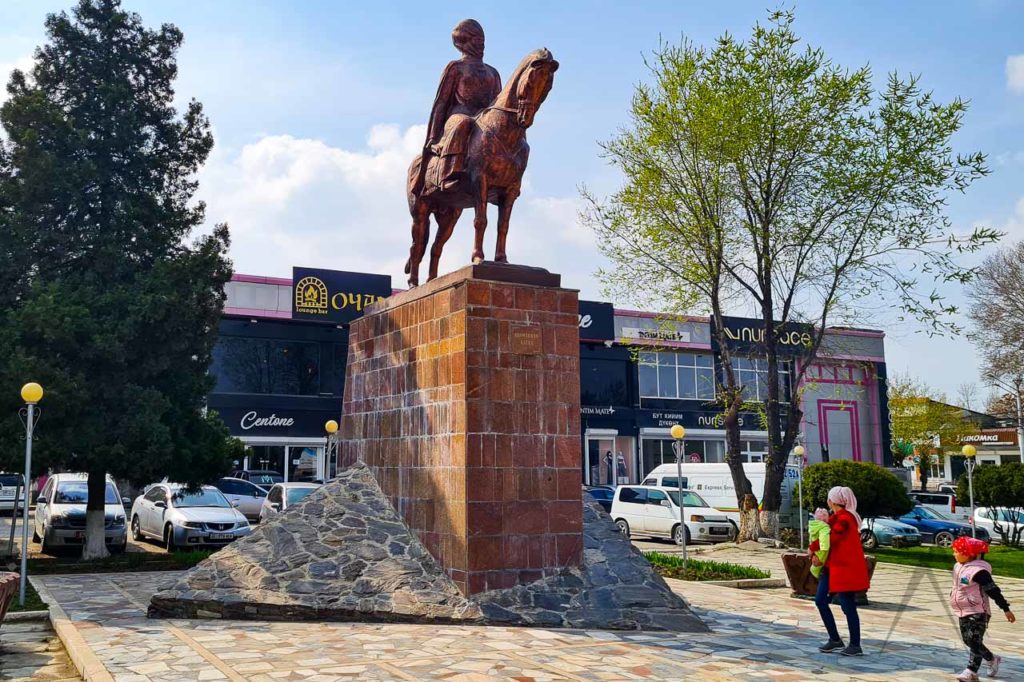 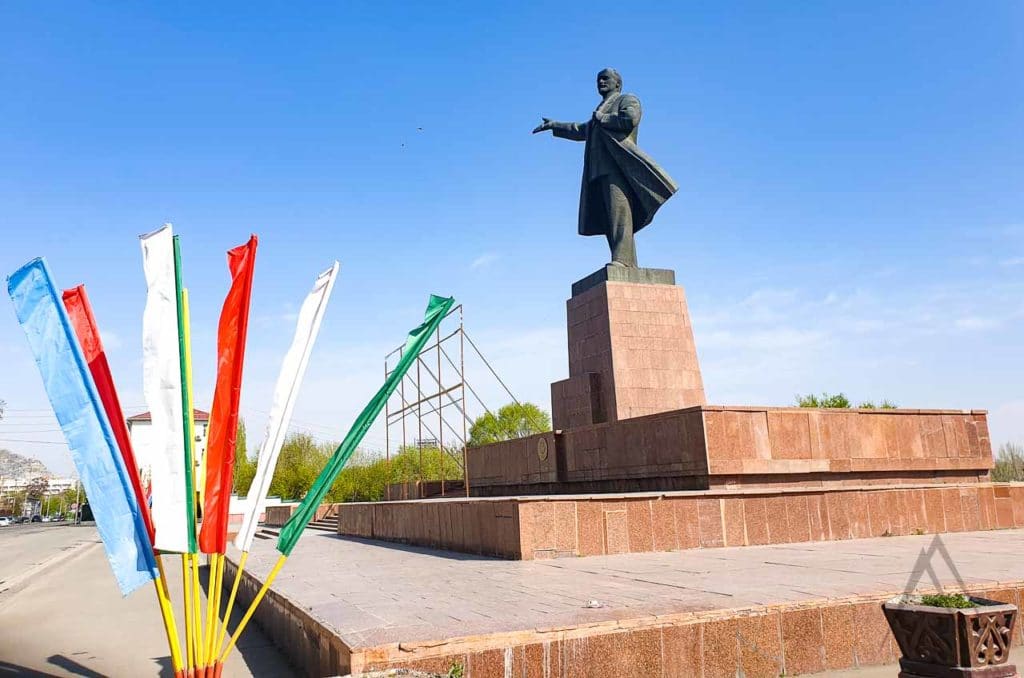 Osh is a significant regional center and only five kilometers from the Uzbek border, Osh holds a distinctly international atmosphere. You might feel like you are in Uzbekistan or certainly not entirely in Kyrgyzstan and it is true that Osh is already physically and spiritually closer to Kashgar in China than to Tashkent.

Various ethnic groups have always existed in the Fergana valley particularly in the city of Osh. Approximately half of the population of Osh are people of a different ethnicity than Kyrgyz. The other ethnicities represented are mainly Uzbeks and the smaller minority groups are Tatars, Russians, Germans, and others.

The diversity of the population can be also seen in the arts and cuisine of Osh. The differences can be seen for example in the different ways of preparing plov and the handicrafts differ a lot from the Northern or Eastern parts of Kyrgyzstan.

There are many legends about Osh, some of them often associated with historical names such as Alexander the Great and the prophet Suleiman. Archaeological excavations carried out on the territory of the city have revealed that the estimated age of the very first structures is about three thousand years, while the written artifacts found in the city are at least 1000 years old.

Furthermore, historians and archaeologists believe that Osh was formed on the site of a settlement of farmers who actively hunted in the Bronze Age. Evidence for this hypothesis was found on one of the slopes of Suleiman Too Mountain.

The city was destroyed by the Mongols in the 13th century and finally rebuilt. Until the 15th century, before the sea routes were found, it was an important stop on the trade routes between China, India, Middle-East and the Europe.

The historical past of Osh was quite turbulent and dynamic also in the latter times. In the 18th century, the eastern city passed into the possession of the Kokand Khanate and later, already in the 19th century, it became part of the Russian Empire. In 1876, the settlement received the status of a county town, and already in 1939, it became the administrative center of the Osh region. 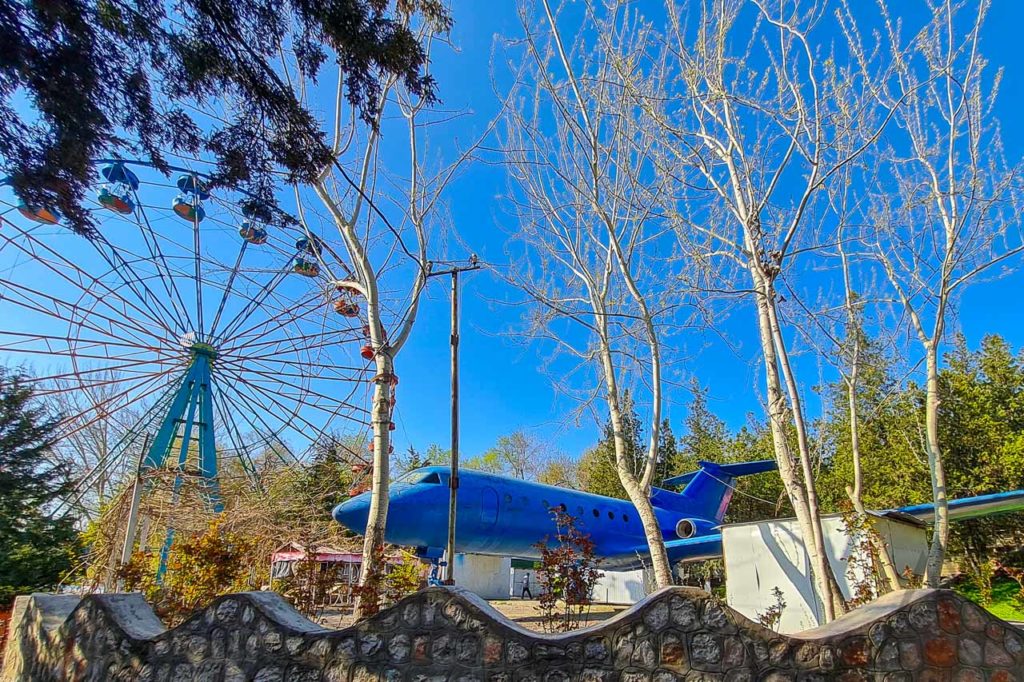 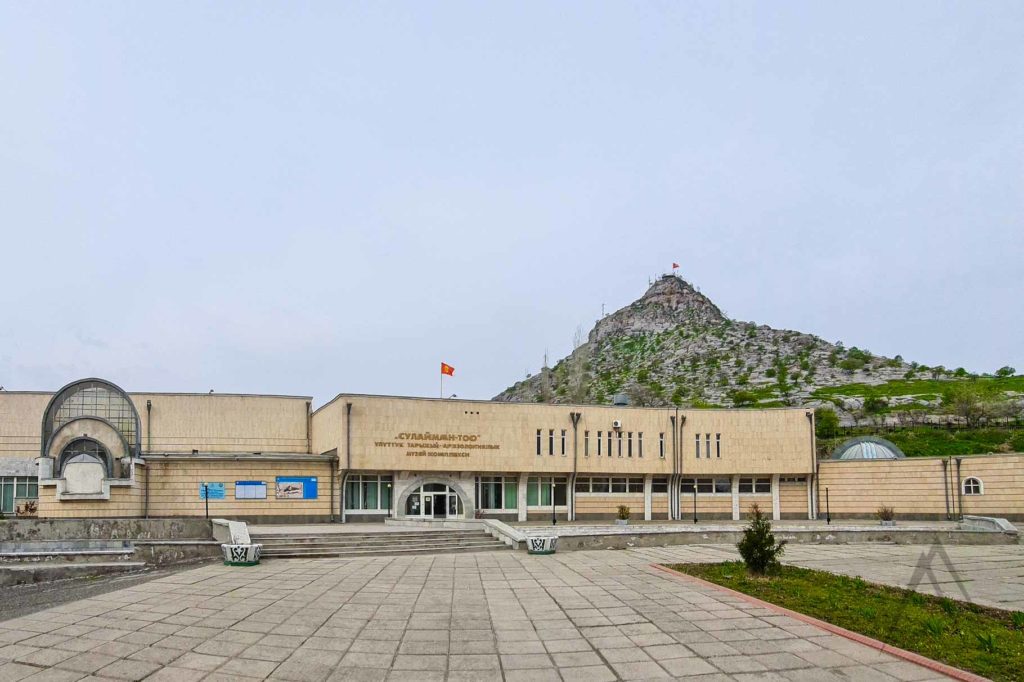 How to get to Osh

Traveling to the Osh region from Bishkek, you will enjoy the beauty of the Kyrgyz landscapes along the way. The road passes through picturesque Suusamyr valley, Chychkan gorge and paths take you next to sights that should have you to wander off from the fastest path. Examples of these are the Toktogul reservoir, world’s biggest natural walnut forest Arslanbob and beautiful lake Sary Chelek. Within few hours on the road you may experience all the seasons as the highest mountain passes reach almost 4000 meters.

Osh is well connected with the nearby Kyrgyz towns, but also with Batken, Alay valley and Bishkek. The buses (or mostly marshrutkas) leave from two locations: The new and old bus stations of which the new is situated at the Northern side of Osh. The city is also connected with marshrutka connections to Uzbek and Tajik towns and cities in the Ferghana valley, like Andijan, Kokand, Fergana and Namangan in Uzbekistan and Ishfaran and Khujand in Tajikistan.

By taxi, you will reach in 10 hours from Bishkek and it will cost approximately 1200 som. You may get a taxi near the West bus stop or next to the Osh Bazar. Usually, drivers loudly shout out for customers and when the car gets full (normally a four- or six-seater taxi), they depart. You can also travel to/from Osh easily within the Ferghana valley through the numerous border crossing points between Uzbekistan, Tajikistan and Kyrgyzstan.

By plane, it will take an hour to reach Osh from Bishkek and will cost about 3,500 – 4,000 som. However, you need to get to Manas International Airport which is located 23 kilometers Northwest of the capital at least two hours before departure. Nevertheless flying between Osh and Bishkek is the fastest and easiest way but you will miss many of the sights in between the cities.

Flights between Osh and Bishkek are operated five times a day. There are also international flights to Osh from several Russian cities, Almaty and even to Kuwait and Urumchi in China.

What to do in osh

Osh is a lively city that despite its smaller size can appear busier than Bishkek. It has the largest mosque in  Kyrgyzstan and one of the largest and most crowded markets in entire Central Asia. Even though the Soviet legacy of town planning and architecture dominates, a sight of ancient Central Asia still spread through, particularly around the bustling bazaar.

Sulayman-Too, or also known as Suleiman’s Throne mountain is the centerpiece of Osh. Kyrgyzstan’s second largest city circles around the base of the hill. Sulaiman-Too is one of the holiest places in Central Asia, nicknamed Little Mecca. It is a five-headed calcareous rock stretching from west to east 1140 meters long. There are many historical monuments and sacred caves visited by numerous pilgrims and a cave museum built into the mountain during the Soviet time 1949. The largest mosque in the region has been constructed at the foot of Sulaiman-Too and it can hold up to five thousand people.

Get engaged with Osh residents

A big part of Osh surroundings and even the most central area is still full of traditional small houses with hidden yards. They remind somewhat the Uzbek type mahallas and have a feeling of their own with the narrow closed alleys and the big gates to the inner yards..

Southern capital of Kyrgyzstan has a lot of restaurants of not only Uzbek and Kyrgyz style dishes as well as various cuisines. Osh also offers many green parks to be explored.

The culture and language in Osh and Southern Kyrgyzstan has a lot of influence from Uzbekistan and people are generally more religious and conservative in Osh region compared to Notrhern Kyrgyzstan and especially Bishkek.

Walk in the Osh Parks

Osh is a market town to its very heart and its bazaar has occupied the same spot on the banks of the Ak Bura river for 2000 years called the Jaima Bazar, which is one of the oldest in Central Asia. The vendors offer a wide range of goods from nuts and dried fruits to knives and ceramics made by local artisans. You may also visit one of the three livestock markets in the region, but be sure to go there in the early morning hours when sellers still lively bargain with buyers of diverse livestock.

Historically, markets are also places of friendship, communication and cultural exchange. Kyrgyz markets and bazaars are more than a place to shop and from tourist perspective the perfect places to observe the local culture and people. The Osh markets/bazaars are popular for their cheap and the most delicious samsy, plov and variety of vegetables.

Video by Tatiana Potanina. These samsi are extremely small for Osh as usually they are too big to be held in one hand. 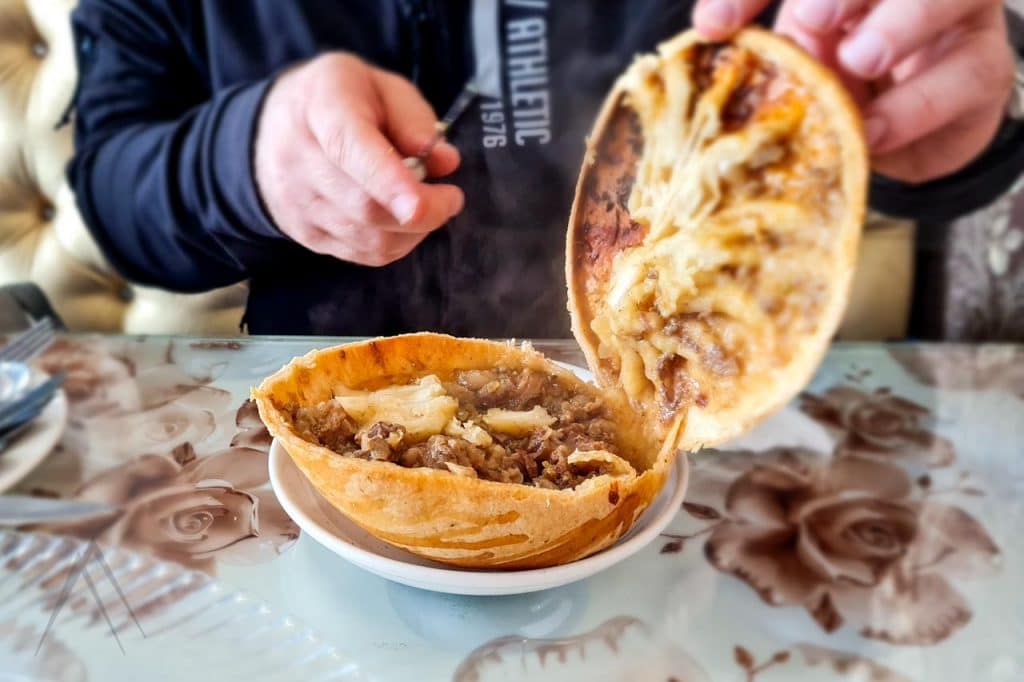 Osh is one of the rare places in Kyrgyzstan where you can observe the contrast between pre-Soviet, Soviet and modern architecture. Old mahallas (local residential areas) and mosques are proof of the ancient history of the city and Soviet monuments, memorials and mosaics recall recent radical changes and the Soviet past of Osh in the twentieth century.

Most tourists staying in Osh visit the Sulayman too cave museum but neglect the museum at the east side of the mountain just next to the three story yurt that actually has another museum inside it together with some souvenirs and possibilities to have photos with the local clothing. The museum at the feet of the Sulayman too is called the Osh regional museum and it has a good amount of artifacts telling about the long history of the region. The museum is built in a very soviet style with the white marble everywhere. It is also a place where the ones with some Russian skills can read about Kurmanjan Datka, who is the great leader of the Southern Kyrgyzstan. 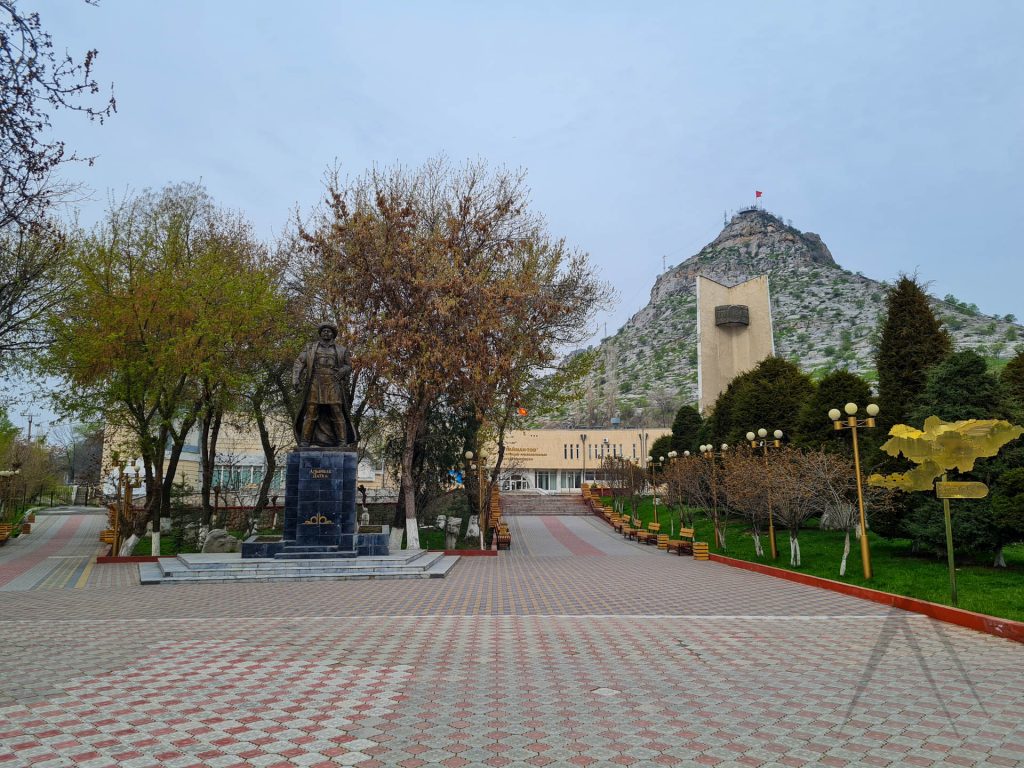 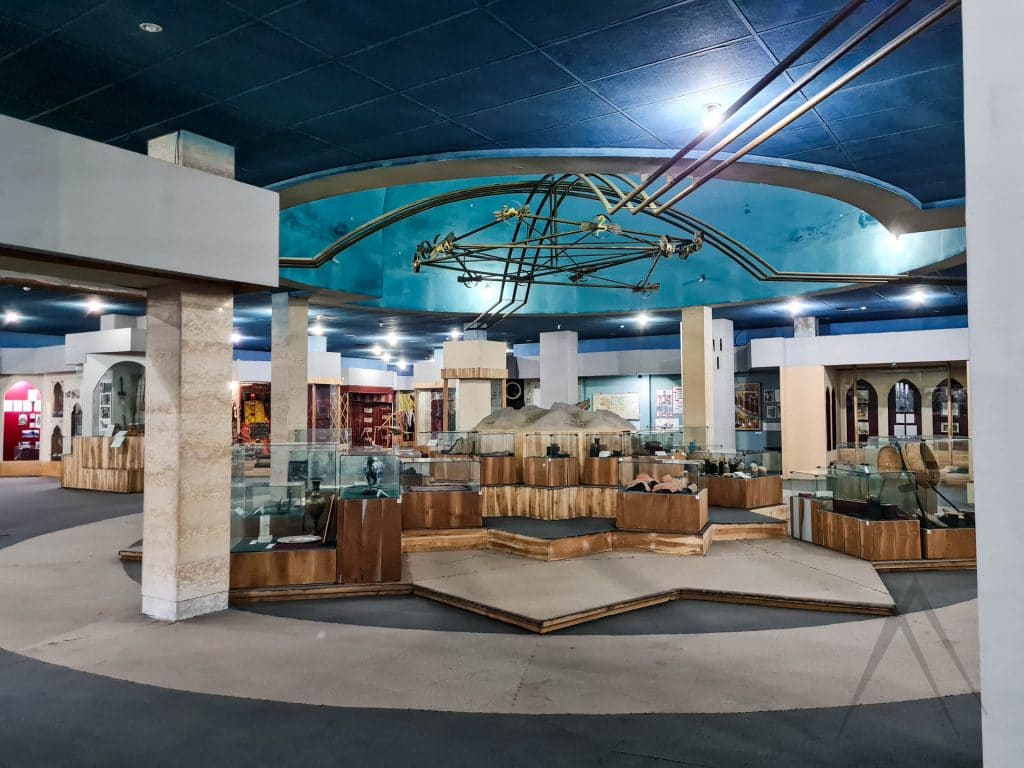 Where to stay in Osh

There are plenty of options for cheap and comfortable accommodation in Osh. If you want to save, stay at a hostel. A room with a shared shower and kitchen will cost only 7-10$ /day. If you wish to have more space and comfort, rent a room in the guest house for about 15-20 $ a day. If the budget allows, you can also stay in “modern”, comfortable hotels for 45-70 $. Generally Osh is a lot cheaper than Bishkek, especially considering accommodation and eating.

What to see in Osh region surroundings

The best time to plan your trip to the Osh region at the end of August – the beginning of September, when crops are harvested from the fields and the sun will not burn as much as in summer. Also the spring time is beautiful in the Fergana valley as in all Central Asia.

One of the must-see point is the Caves of Chil-Ustun. Walking in dark caves hearing the cries of bats is not a pleasure for the faint of heart, but if you can overcome the bats you might get impressed. Those who like to meet history are advised to stop by the city of Uzgen. Once the second capital of the state of the Karakhanids. In Uzgen you can enjoy ancient mausoleums and mosques, authentic oriental bazaars and the authentic Uzgenskiy plov made with the famous reddish rice.

Destinations and sights near Osh

The Celestial Horses of Aravan