Khujand is a city located in the Tajik part of Ferghana valley at the banks of the river Syr Darya nearby the border to Uzbekistan and not far from Kyrgyzstan and separated from the rest of Tajikistan by the Fann mountains. The city was founded by Alexander the great during his conquest of the area already 2500 years ago and is still an important center, quite often referred as the Tajikistan’s Northern “capitol. It is also told that there was a city called Cyropolis at the same places founded by Cyrus the great about two centuries before Alexander was at the place. Khujand is a lot more wealthy than the other Tajik cities except of course Dushanbe. Nowadays the city houses about 175 000 citizens and a lot more in the surrounding Sughd province, which is the wealthiest province of Tajikistan.

Khujand is originally an Uzbek city but was given to the Tajik Soviet republic by the Soviet Union and was formerly named Leninabad. Some say that giving the town to Tajiks was a punishment from the disobedience of the Uzbek republic together with the founding of the Tajik republic officially that used to be previously under the Uzbek Soviet republic.

Khujand has a feel of a more real city compared to Dushanbe having it’s drastic contrast with the new decorated high rises and the clay houses hidden away from sights. Khujand respects it’s history more and feels and has some vibes of an Uzbek city, which is natural as it is located in the mostly Uzbek Ferghana valley, mixed together with the Soviet monumentalism and is the home of the largest Lenin statue in Central Asia, though the 24 m Lenin has now been moved further from city center to the victory park. The collapse of the Soviet Union and the appearance of the borders with the neighboring sovereign countries must have been a hard hit for the city.

The major Khujand sites are located at the park area located on both sides of the Syr Darya and the registan about 1 km Southeast from the park/monument area and are best reached by walk. Most of the hotels are located around the park area as well. At the North side of the Syr darya there are several large complexes celebrating the 20 years of independence of Tajikistan including a football stadium, swimming pool and exhibition center and a hippodrome. The very popular Somoni park with a huge statue of Ismail Somoni is also located there and is a popular place for locals to walk around and to admire the lit fountains of the park.

The most interesting sights are South of Syr darya.

The park area at South bank of Syr Darya

The Kamoli Khujandi House Museum located at Western end of the park displays what wealthier homes, such as that of Kamoli Khujandi in the 14th century would have looked like. The Kamoli Khujandi mausoleum is at a very center location a little bit North from the house museum. Kamoli Khujandi is considered being one of the greatest romantic poets of the 14th century. He was born in Khujand but lived most of his life in Tabriz, Iran where he died and is buried. There are also several other monuments and fountains in the park stretching West to East and also South along the Ismoil Somoni street and Maksudjon Tanburi street towards the the Kamoli theatre.

The Panjshanbe two floor bazar is the best place in town to acquire anything you need. The name of the bazar means Thursday in Tajik and is one of the largest bazars in Tajikistan and Thursday is still the busiest day of the bazar. The architecture of the bazar is a kind of a mix of Soviet and Uzbek/Arabic styles with the green and pink colors together with large arches at the roof held up by large columns reminding somewhat a madrasa in it’s shape and design.

Khujand has a lively, populated registan with the bazar, Majid i Jami Mosque & a madrasa and the mausoleum of Sheikh Musil ad Din mausoleum about 1km walk Southeast from the park and monument area by the Syr Darya. Look for a giant blueish dome and you can’t miss it. This is the Sheikh Musil ad Din Complex dating back to 1394. It was built as a tomb to the Khujand born 12th century poet and miracle maker Sheikh Musil ad Din. The original tomb was built in the 12th century, razed by mongols like almost everything in the region and later rebuilt in 1394. The older minaret of the two at the square dates back to 1865.

The Khujand Citadel has been partly restored and at the Southeast corner of it the Historical museum of the Sughd region with big doors and several floors has been built. The museum is well laid, has English speaking guides and tells about the history of the fortress and has many archaelogical findings made in the fortress, for example a 4 meter statue of Temur Malik. You can get a good view of the size of the citadel by climbing on top of it and walking along the ruins of the clay made mounts. From here you can also observe the surrounding park area and the Syr Darya.

By the way not far from the citadel ruins next to the river in the park there is the local Zeravshan Tourism development association service point from where you can ask all the information you need to travel the area surrounding Khujand. 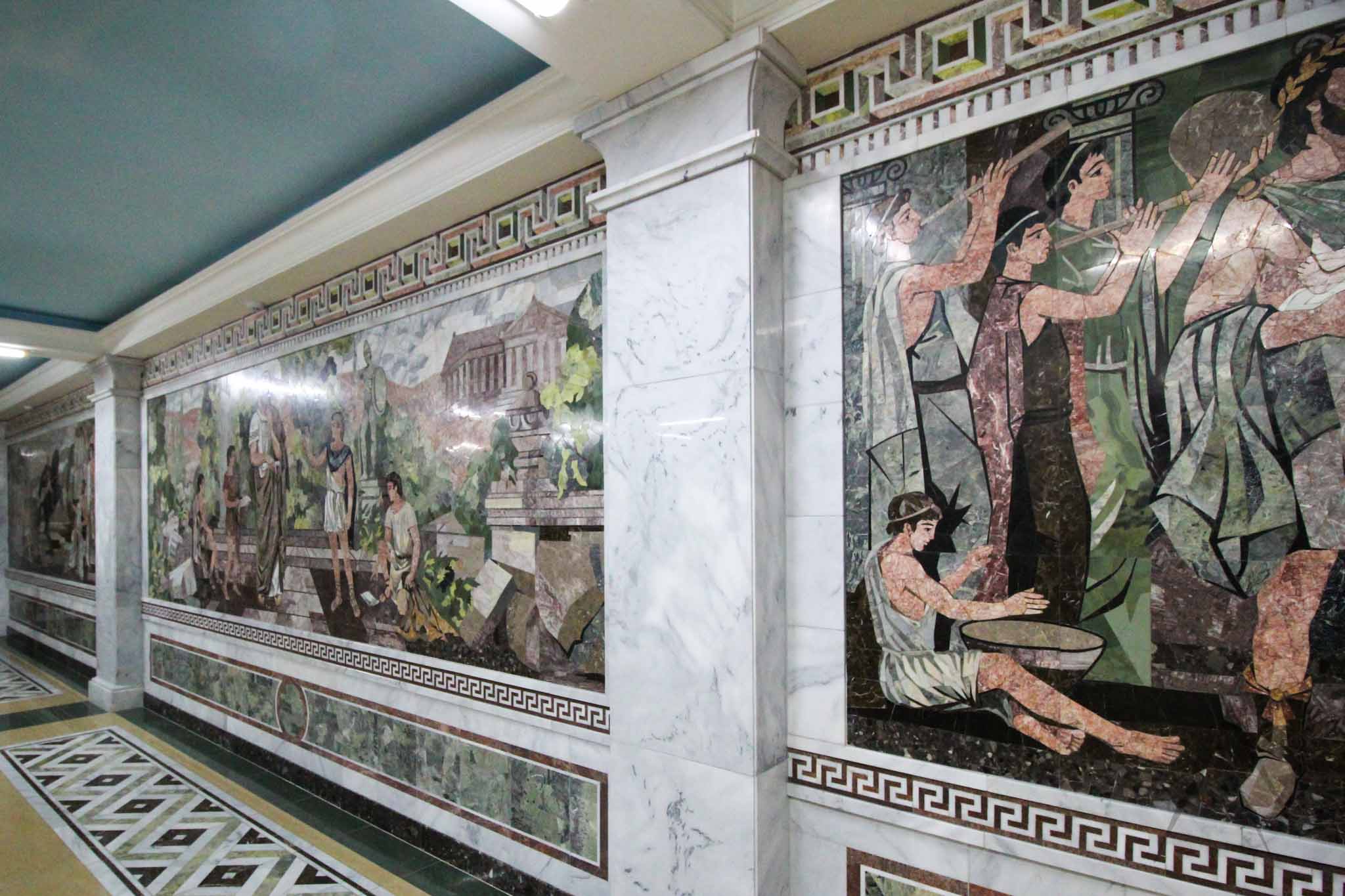 The arbob palace is a copy of St. Peterburg’s Tzarist winter palace standing on a collective farm outside Khujand just about a 15 minute (or 10 km) drive towards South-East. The palace is filled with Soviet propaganda yet having a nice un-Soviet water garden and a very Tajik teahouse with wood carved columns outside in the garden with the same joining of Tajik and Soviet style arts continuing inside the palace. The palace was constructed by a social collective farm leader Urunkhujaev who had been impressed by the original winter palace and was built as a communal hall for the peasants. The palace had it’s peak moment in history when the counterparts of the Tajik civil war used it as a place of negotiations for ending the war. 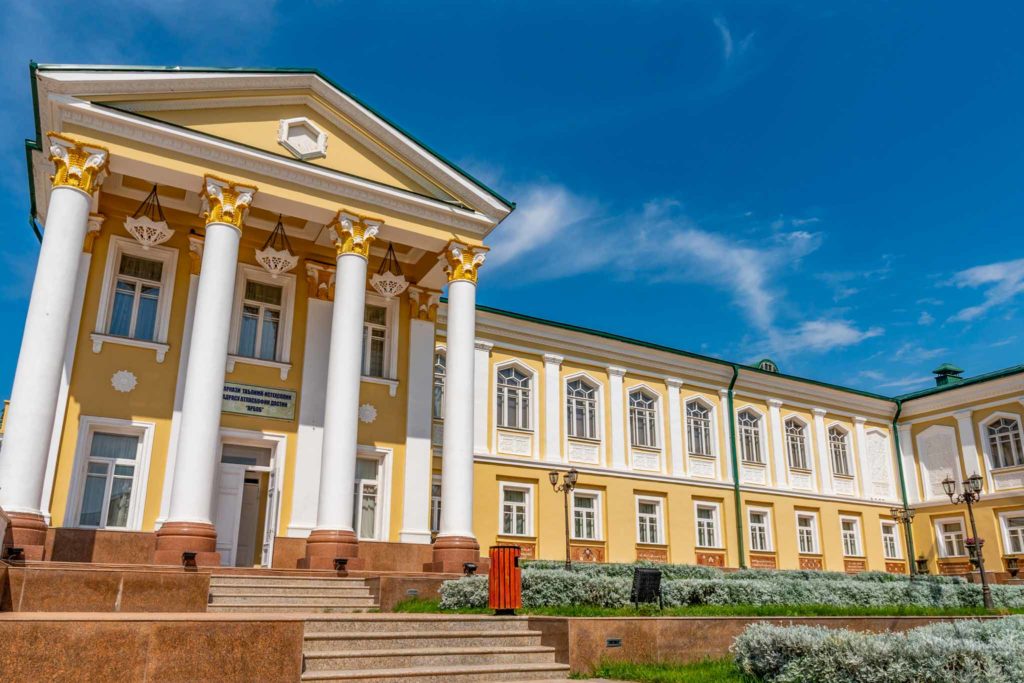 Kairakkum reservoir is about 20 km drive East from Khujand and is called often the “Sea of Tajikistan” by the locals. It is the largest reservoir in the Ferghana valley and has many Soviet type sanatoriums or resorts on all sides of it. Some of the places have stayed in the Soviet era but others have been recently upgraded and renovated to fulfill the needs of today also for the foreign tourists. The lake is a good place for a day trip and to cool down in the water if you are in the region during the hottest summer period.

How to reach Khujand

You can reach Khujand from Dushanbe by wheels with shared taxis within 5 hours and the road is quite spectacular with high passes, long dark tunnels and huge elevation differences and views with different colored mountains and small villages in the valleys and plateaus. Marshrutkas can take you to Isfara and Istravashan several times a day from Khujand.

Khujand can be reached by roads from many directions from the neighboring countries:

1. There is a border crossing point to Uzbekistan about about 1 hour drive Northwest called Oybek open 24/7 and is the easiest way to reach Tashkent which is only 100 km away.

2. Khujand can also be reached from East from Uzbekistan Ferghana valley through the Konibodom – Beshariq border from cities like Kokand, Fergana, Namangan, Andizan and Osh from Kyrgyzstan.

3. A border south to Kyrgyzstan towards Isfana (not Isfara) is called the Kulundu – Ovchi border and can be also passed by foreigners. There are other border control points but they are only bilateral between the neighboring countries.

There are two daily flights from Dushanbe to Khujand and it’s airport is also well connected to many Russian cities like Moscow and St. Petersburg as there are many people working in Russia from this area of Tajikistan as well.

Khujand can also be reached by train via Uzbekistan from Samarkand and all the way from Moscow but the trains tend to be very infrequent and the timetables might change still quite often according to the relations between Uzbekistan and Tajikistan. The train station is away from the city center area close to Khujand airport about 15 km Southeast from the city center. Also the visa requirements of the train traveling might become quite bothersome as you might need to obtain different type visas for Uzbekistan and Kazakhstan depending on your nationality.