Turkmenbashi the westmost city of Turkmenistan, standing at the end of the road serving travelers heading on to the Caucasus and the first taste of Turkmenistan for those arriving on the ferry from Baku. Turkmenbashi is the administrative hub of the Balkan region 560 km west of Ashgabat. It is the biggest port town with a friendly population of 60,000 people. The town is enclosed by low mountains from the east and faces the Caspian Sea in the west.

Turkmenbashy is a comfortable place to spend a couple of days in summer, with some good accommodation options and an impressive natural setting. As the terminus of the Baku ferry route, it is also for some travelers the first point of contact with Turkmenistan and for some the last.

Turkmenbashy lies on the northern shore of a gulf, presenting an open harbor that first attracted the interest of tsarist Russia about 300 years ago. Prince Alexander Bekovich, from an elite family of the Caucasus, arrived here in the early 18th century, to pursue the interests of Peter the Great in the trade routes of Central Asia and rumors of gold riches along the banks of the Oxus (Amu Daria).

The first settlement here, Krasnovodsk (means red water in Russian, was named due to the reflection of the cliffs in the sea) was established when a unit of Russian troops under Prince Alexander Bekovich set ashore in 1717 to march to Khiva. They chose this spot because it was close to the place where the Oxus River (Amu-Darya) had once drained into the Caspian Sea, and the dry riverbed provided the best road across the desert. However Bekovich’s efforts in 1717 to persuade the Khan of Khiva to accept Russian protection resulted in his murder, and the massacre of most of his troops.

Russians didn’t come back for more than 150 years. Although in 1819 a young captain named Nikolai Muraviev arrived at this natural harbor, as part of another Russian expedition. Traveling eastwards across the desert to Khiva, Muraviev was able to deliver to the khan the message that the tsar was interested to develop his trading links, by way of a new port at Krasnovodsk. Muraviev was lucky and survived, unlike Bekovich. He had also been tasked with covertly estimating the state of Khiva’s defenses, with a view to the possible Russian conquest, including to free the many Russian slaves held by the khan.

But Russia was not yet ready to launch an attempt to bring the region under its control until the 1860s. Following the capture of Tashkent, Samarkand and Bukhara, Russia found itself increasingly in need of a port on the eastern shore of the Caspian Sea which could help serve as a launch-pad to bring Transcaspia under its control and improve its lines of supply to its new domains.

In 1869 a Russian force under the command of Nikolai Stoletov landed at Krasnovodsk and established a permanent fort. By the end of the 19th century, the port of Krasnovodsk had become the western terminus of the Transcaspian Railway and a town of vital strategic importance. This was not displayed in any scope of urban planning. Its most impressive building was for long its lively railway station, and Krasnovodsk took an out-of-the-way feel.  Karlis Ulmanis, the first prime minister of independent Latvia, died here in detention in 1942.

Thousands of Japanese prisoners of war were left here after WWII and ordered to build roads and buildings. Since then the town has become moderately cosmopolitan, with a mix of Russians, Turkmen, Azeris, Turks and a handful of Western oil workers. The main buildings in the town center were the work of Japanese prisoners of war. In the Soviet period, many people were sent here who had been denied Moscow residence permits.

With the Independence of Turkmenistan, Krasnovodsk has been renamed Turkmenbashy, “Leader of the Turkmen” the title held by ex-President Niyazov. The Turkmen government has made large investments in the modernization of the oil factory, the largest in Turkmenistan, which was moved here during World War II to keep it out of German reach. A redevelopment of the town’s coastal strip named Awaza, has been launched as well, developing better hotel accommodation. The town’s ethnic mix has been growing rapidly since independence, especially through the emigration of Russians and other non-Turkmen minorities.

How to get to Turkmenbashi

Turkmenistan Airlines flies to and from Ashgabat twice daily and to Dashogus on Tuesday, Wednesday, Friday and Sunday. The airline office is in the same building as the Hotel Hazar. The airport is 8 km east of the ferry terminal.

They cost the same as a seat in a shared taxi and are far less comfortable. An overnight train leaves daily from Turkmenbashi to Ashgabat (slow trains about 15 h) with platskartny/kupe options.

Shared taxis leave outside the colorful train station on Atamurat Niyazov street for Ashgabat (five to six hours) via Balkanabat (1,5 hours). They also run north along the bad road to Kazakhstan (seven hours), crossing the border and stopping at the town of Zhanaozen (Novyi Uzen in Russian). Marshrutkas also leave from here to Ashgabat through Balkanabat.

From the Turkmenbashi ferry terminal, there are frequent untimetabled cargo ships to Baku in Azerbaijan, most of which take passengers, although there’s always the chance that there won’t be a departure for several days.

Avaza is the most famous sea resort center of Turkmenistan and is located about 8 km west of Turkmenbashi city center. It stands out onto the open waters of the Caspian Sea. During the summertime, the beach cottages luxury hotels are packed with wealthy Turkmen. The village contains holiday complexes owned by various government organizations, plus many privately owned summer camps. 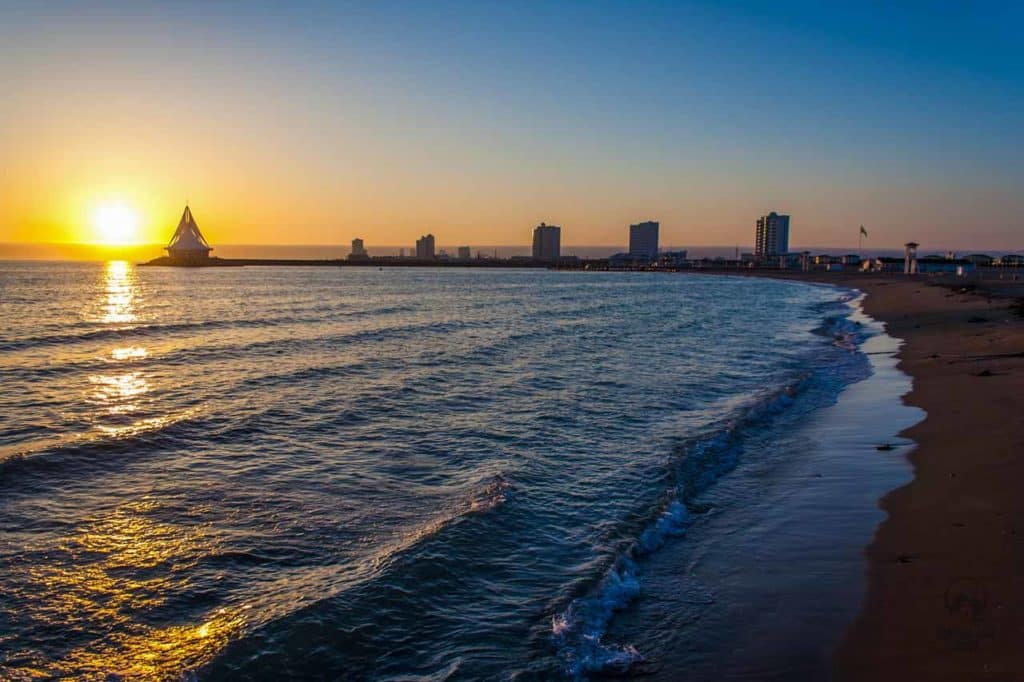 The Museum of Regional History is located at the Garayeva street in a charming old structure west of Magtymguly square. The exhibition includes some interesting maps, images of the Caspian Sea, traditional Turkmen clothing and a yurt. In the last room, a photo exhibition recalls an expedition made in 1936 by a group of fishermen from Krasnovodsk to Moscow.

The Gates of Central Asia stand in a small park and it is the only port gate in Central Asia since Turkmenbashi is the only seaport. These gates are one of the rare reminders of the Krasnovodsk fortress, as in the past they were topped with Red Stars and were the main entrance to the fort. The Gate plan has been changed over time and the red stars have been replaced with crescent moon symbols, which represent the “Muslim” preponderance in Turkmenistan. The old military gates have also been designed for the 5 Turkmen provinces at each column. At the top of the column stands a single row with the 5 emblems.

Armenian Church sits next to the city mayor’s office. The building has suffered badly from damage and negligence over the years and is currently closed. Armenians arrived in Turkmenistan during Imperial Russian times, others during the Soviet era. More recently, more arrived following the end of the Soviet Union and the conflict between Armenia and Azerbaijan. Minorities have limited rights in Turkmenistan and, as might be expected, many Armenians with the means to do so have emigrated to Armenia, Russia or USA in recent years. There is no registered Armenian place of worship in Turkmenistan.

Russian Orthodox church stands back from the seafront proofing to the city’s past as a Russian fortress town. All that remains of the fortress itself are the gates – distinct creations with red stars mounted about them – which can be found in the park below the museum.

A large Oil workers Cultural Palace constructed by Japanese prisoners of war in the late 1940s stands opposite to the railway station. The building looks lively due to its marked windows and by arches and geometrical patterns around the entrance. The Japanese also built the apartment blocks facing the cultural palace to the north and west, topped with little towers. There are several pieces of sculptures around the cultural palace. On the northeast side of the building sits a golden ex-President Niyazov in front of a row of concrete arches.

Japanese memorial located next to the airport honors the thousands of Japanese prisoners of war who spent years in Krasnovodsk building roads and structures. A Japanese graveyard lies just nearby. The beaches near town are a bit rocky and not great for swimming, considering the nearness of the town oil refinery. There are better and more clean beaches at Awaza, 8 km west of the city.

War Memorial lies in the coastal part of the city focusing on the main statue of Atamurat Niyazov, President Niyazov’s father, in military uniform, right hand over his breast. It was installed in 2004, replacing a Soviet composition that represented three bereaved Turkmen ladies (mother, wife, and sister, possibly). The eternal flame at the foot of the statue today burns at the center of an eight-pointed star, rather than a five-pointed Soviet one. A memorial to the Bolsheviks who died during the Civil War stood until 2004 immediately to the west of the main war memorial but has now been removed.