Kyrgyzstan – Kazakhstan tour in 13 days focuses on the natural wonders of the mountain areas of Southern Kazakhstan and Northern Kyrgyzstan which are the best developed areas for tourism of both countries. With this tour you will see the very highlights of Kazakhstan and Kyrgyzstan easily and without traveling vast distances daily with 3 days of trekking on the Kyrgyz side of the tour and enjoying the amazing views of the Tien Shan mountains and the Pearl or Kyrgyzstan – the Issyk Kul lake. 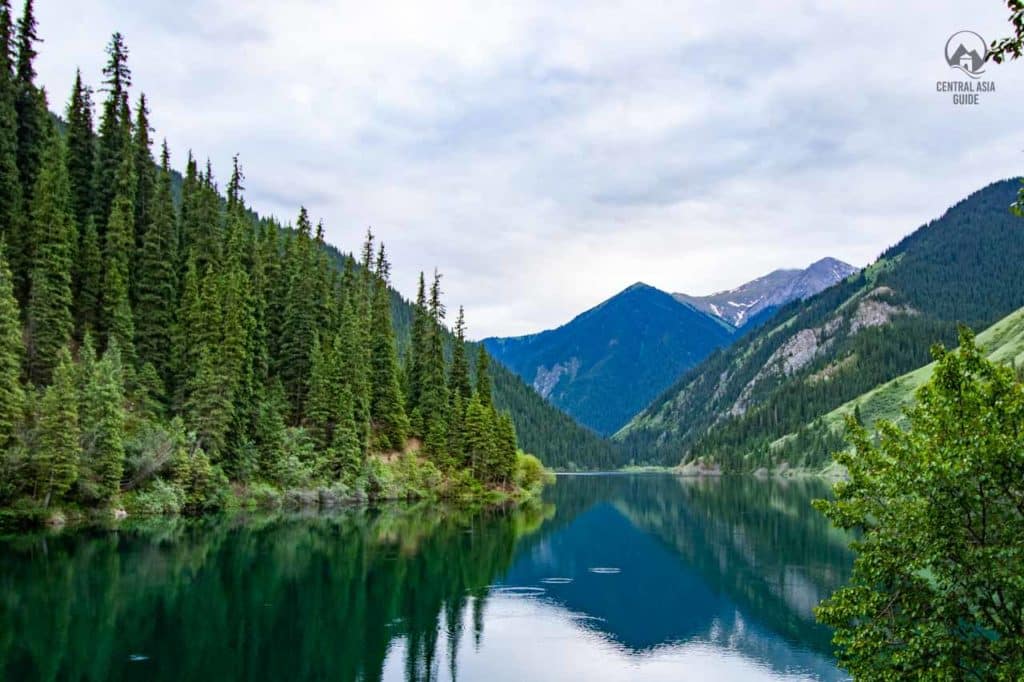 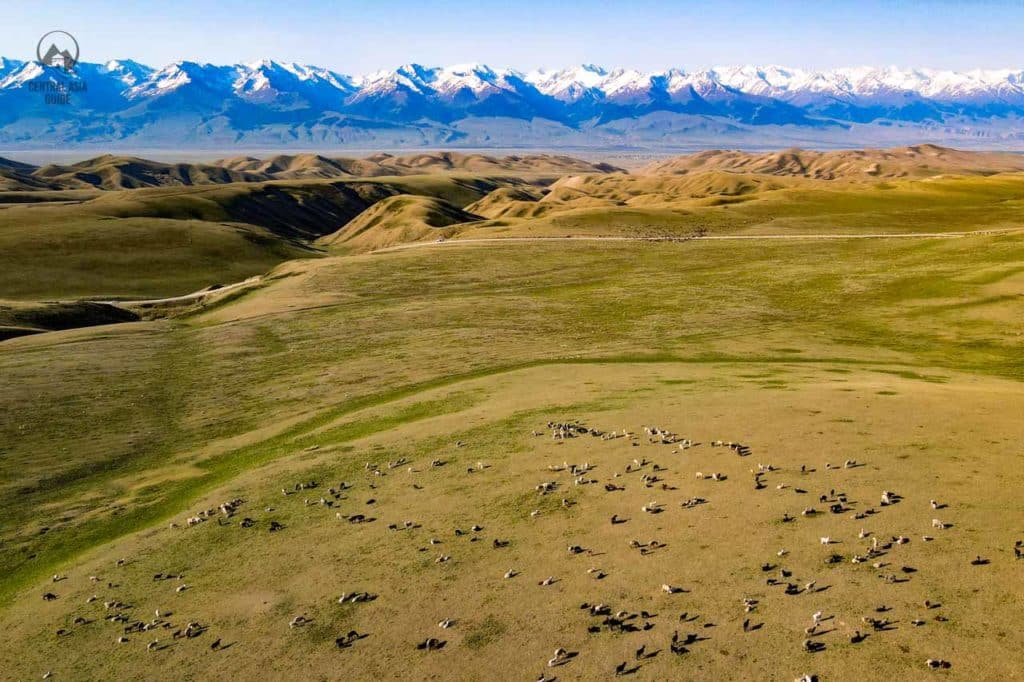 City tour around the center of Almaty. Visit to Republic Square and Monument of Independence. Walk via old city center (today: Square Astana) to the 28 Panfilovtsev Park. Along the Avenue of memory obelisks with names of 28 fighters of the 1075th regiment of the 316th shooting division, accepted unequal battle with German tanks in the winter of 1941 are established during fight for Moscow), Zenkov Cathedral (monument of cult architecture of Christians in Kazakhstan).  We will visit the Museum of Musical Instruments, Abai Theater, Green Market.

Overnight: hotel in Almaty
Meals: B / L / D.
Altitude during the day: beginning of day/end of the day – 800 m in Almaty

Breakfast in the hotel. L eave Almaty and head towards Basshi in Altyn-Emel National Park. On the way, we will drive by Kapchigay. We will visit the Bes Shatyr barrows and necropolis tomb of east Scythians. The tomb consists of thirty barrows of different sizes and hundred ritual menhirs.

Altyn Emel national park, 250 km north of Almaty, has been dealt a good hand of weird geology spread around its large steppe territory. The most unusual are the 4 sand dunes, which don’t move despite very strong winds. They also produce a deep humming noise, like an airplane flying overhead, when you slide down from the top. Upon arrival to Altyn –Emel excursion to singing dunes and walking there for 2 hours.

After breakfast, we will continue our excursion to Charyn Canyon. The Charyn Canyon is located in the Charyn National Park. The Canyon itself is approximately 150 km long, and, in places up to 300 meters deep. One area of particular interest, is an area of 2km called the Valley of Castles, due to the pillars and rock formations forming imposing, almost man-made structures. Hiking on the site for about 2 hours. Lunch as a picnic. Transfer to Saty village.

After breakfast, we will go to Kol Sai Lake. Kolsai is a succession of 3 alpine lakes between altitudes of 1700 – 2650 m. The 3 lakes are exceptionally clear and lie in an idyllic location, surrounded by massive cliffs and mountains with snowy caps and wooded slopes. Hiking on the site for about 4-5 hours from the first to the second lake. Lunch as a picnic.

Visiting San-Tash barrow. San-Tash means counted stones. The story about San-Tash came from the time of Great Timur when he asked all soldiers of his army to put stones in one place. He wanted to see how is bid barrow with stones and see at the same time how is big his army. Picnic for lunch on the way. Upon arrival to Jergalan (Jyrgalan) village dinner and overnight.

Accommodation: guesthouse in Jyrgalan
Meals: B / L / D
Altitude during the day: the beginning of the day – 600m in Saty, at the end of the day – 2300 m in Jergalan.

Accommodation: Guesthouse in Jyrgalan
Meals: B / L-picnic / D
Altitude during the day: start point – 2300m, highest point – 2860m on the lake, end of day – 2300m in the guesthouse
Duration of the trek is about 4-5 hours
Distance is about 13km

Breakfast at the guesthouse. Transfer to Nature Park Ak-Suu (1,5 hours), the start point of the trek. Soft one-day trekking in the Nature Park during 4-5 hours. You will cross Kara-Beltek pass 2606 m and come down to Katakol town. Transfer to the hotel about 30 minutes. Dinner in Tatar family.

Breakfast. Transfer to the start point of trek in Svetlaya Polyana Gorge (1 hour). Soft one day trekking from Svetlaya Polyana via Kok-Jaiyk Pass to Jety-Oguz. Duration of trek 4-5 hours. Picnic for lunch. Transfer back to Karakol about 1 hour. Dinner in Uigur family.

Breakfast. City-tour in Karakol. Visit Sunday animal market early in the morning. A city tour with visiting Museum of Russian Explorer, Mikhail Prjevalsky.  We will visit Russiam Orthodox Church and Muslim Mosque in Dungan Style. In the afternoon transfer to the shore of Issyk-Kul lake.

Accommodation: Dinner and overnight in the yurt camp.
Meals: B / L / D
Altitude during the day: the beginning of the day – 1800m in Karakol, at the end of the day – 1600 m in Issyk Kul lake.

Breakfast in the yurt camp. Full day in Issyk – Kul. Time to relax and swim on the beach.

Optionally, half a day excursion to Fairytale canyon. The canyon was named due to its bizarre rocky landscape, which for many years has been transformed by wind into fabulous sculptures and formations. Some formations in “Skazka” have been named for their similarity to well-known objects. For example, one set of ridges in the canyon is named “The Chinese Wall” due to its similarity to the Great Wall of China. You can also find what appear to be statues of a hippopotamus, snake, dragon, sleeping giant and even whole castles. Because the different rocks have amazing colors, the rocky statues not only have unusual shapes, but also magical colors.

Or another option, drive to Barskoon Gorge. Barskoon gorge is located on the southern shore of Lake Issyk Kul. At the beginning of the gorge grow rare shrubs and steppe grasses. On both slopes of the canyon rise huge Tien-Shan spruce trees. Above 2800 m grow juniper groves. Along the road running through the gorge of Barskoon there are unusual monuments such as the Soviet truck on the platform and a bust of the first cosmonaut Yuri Gagarin, vacationing on the southern shore of Issyk Kul after his flight into space. Barskoon gorge is famous for its cascading waterfalls.

Accommodation: Dinner and overnight in the Yurt Camp.
Meals: B / L / D

After breakfast transfer to Bishkek.

Optionally on the way we will have a stop in Bokonbaevo village to see the old traditions of hunting with an eagle. For additional price, on the way in Kyzyl tuu village (the village of the Yurt crafts)  we can also visit the workshop that produced the wooden parts of the yurts or optionally visit the other workshop in that village to see the Installation of the Yurt.

On the way visiting of Burana Tower, a place on the Great Silk Road dated to the 11th century. Besides the tower, you will see the ruins of an ancient city called Balasagyn, an excursion to the museum dedicated to this place. Upon arrival to Bishkek accommodation in the Hotel. Dinner in the local Café.

After breakfast in the hotel will be a city tour. During the city tour you will visit Oak park where is the open air museum of Sculptures, historical museum, theatres, Osh bazaar. You will visit Frunze museum. There is a real house of the commander of the Red Army and also Russian Orthodox church.

Prices for the tour in USD per person

Other tours in Central Asia