Kyrgyz-Ata National Park is located 40 km Southwest from Osh at the Southside of Fergana valley and occupies the territory of the Northern slope of the Alai ridge. The park lies at the basin of the river of the same name which is flowing down from the Northern slope of the Kichik-Alai ridge. The park is relatively small and it covers only 1172 ha. The Kyrgyz Ata valley is surrounded by amazingly beautiful sharp snow-covered peaks of the Kichik-Alai from all sides with arrays of juniper forests growing at the slopes being the hallmark of the park. About 30 hectares of the park belongs to a botanical reserve on the East bank of the Kyrgyz-Ata river created with the aim of protecting the areas where saffron and some rare tulip species grow. The mountains of the Alai Range belong to the Pamir mountain system and are partly formed of multi-colored rocks of marble.

There are several gorges including Mazar, Kaldai and Karagoy in the upper part of the park. In the alpine part of the park there is the Pervomaisky pass leading to the Kichi-Alai valley which is a very remote green valley where people are living in the middle of the mountains. The most famous gorge in the Kyrgyz-Ata national park is the Karagoy gorge where residents of Osh and tourists come for picnics and to spend time in nature.

There is another popular canyon in the lower ranges West from Kyrgyz Ata at the confluence of Kyrgyz-Ata and Khoschan rivers in the Nookat valley, called the Aravan Dangi Canyon.

There are also several mineral water springs in the region. Among them is the thermal spring called “Tuya-Muyun” located in the mountain range of the same name and another spring called “Iski-Naukat” in the interfluve of Aravan-Say and Ak-Buura valleys. Moreover, many historical and cultural monuments are scattered across the territory of Kyrgyz-Ata being mainly ancient settlements and burial grounds, where ceramics, weapons, tools, jewelry and household items have been found.

At the northern part of the town Nookat, on the way to Aravan, along the Aravan river is located the Tuya-Moyun mountain range (Tuya-Moyun translated from Kyrgyz as “Camel’s neck”). Actually it is the Kyrgyz Ata river but for some reason it changes its name after entering the canyon in the mountains. The mountain range is known for ore deposits and nonmetallic low-temperature and hydrothermal paleokarst features. The Aravan River cuts through the massif in its central part forming a narrow and about 300 m deep Dangi Canyon. Due to the presence of limestones karst processes are common on the massif meaning that there and abundant number of caves in the area, some of the man made an some natural. 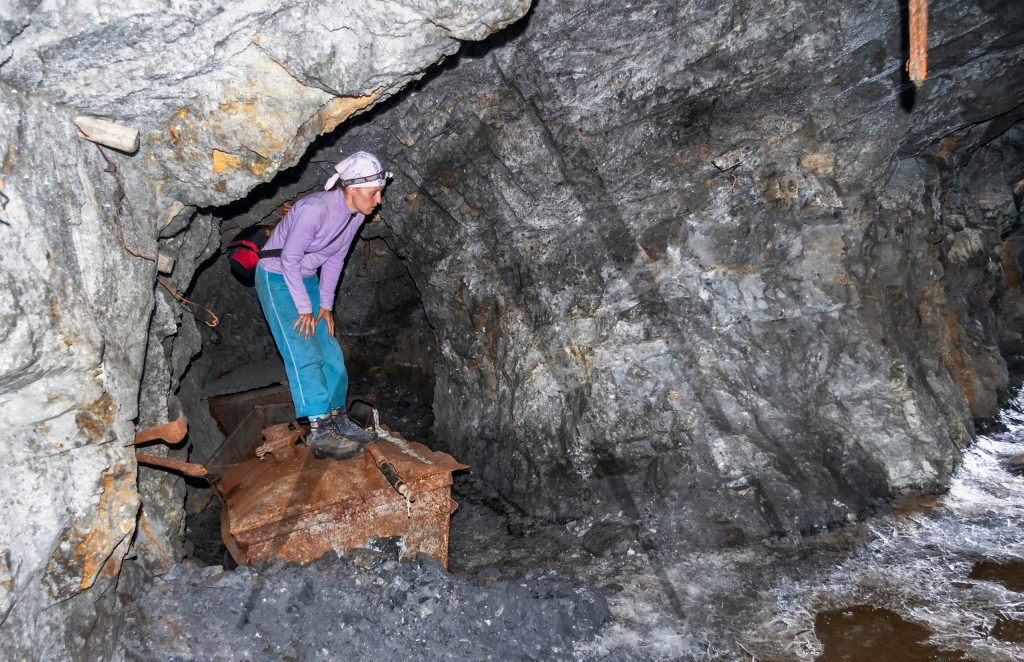 There are several large caves or cave systems that are easily accessible for visiting. Their underground halls and passages are decorated with crystal formations of various colors. The most famous cave systems in the massif are Fersman caves, Surprise cave, Bolshaya Baritovaya cave, Azhydaar-Unkur (Dragon’s cave), Chon-Chunkur and Surprise cave. Natural formations are complex systems of passages, halls and labyrinths with a total length of tens of kilometers.

Fersman cave is the deepest cave in Kyrgyzstan, with a depth of 240 meters below the sea level. It is located about 2 km West of the Dangi gorge. It is a mined out  mine and it has a gloomy smoky underground with drifts and natural cavities. The cave was exploited as a deposit of radium and then uranium from the beginning of the 20th century. By the end of the 1950s it was completely cleared out and the entrances were blocked or blown up. The current entrance hole is about 0.5-1 m in size. The cave is named in honor of academician A.E. Fersman.

The Surprise cave is 450 meters in length is located at the East side of the Dangi Canyon. A small round opening in the wall of the canyon heads to an underground gallery decorated with crystals and stalactites. It is a complex three-dimensional cave, in the lower part reaching the level of underground karst waters.

Bolshaya Baritovaya Cave is located on theSouthern slope of the massif, 40-50 m to the left of the Aravan-Iski-Naukat road, and 1.5 km from the Tuya-Muyun pass. The walls of the cave are almost completely covered with a thick crust of scalenohedral crystals of hydrothermal calcite up to 30-45 cm in size and barite crystals. It is unique primarily due to the low-temperature hydrothermal fluids that are flowing through tectonic cracks and faults. The cave has two entrances – an artificial one and a natural one the first one being 2×2 meters. The second one is a karst opening with size of 1.8×2 m and a depth of 18 m. The length of the cave with an artificial adit is 186 m, the average width is 7 m, and the height is 4.7 m. The temperature in the cave is + 18 ° С for most of the year and humidity 70-80%.

Azhydaar-Unkur (Dragon’s cave) is located on the Southern slope of the Tuya-Muyun massif above the Barite cave. This cave is notable for being home to the huge colony of bats. Their chirping and movement can be heard long before you get close to their habitat.

Chon-Chunkur cave is located on the Northern steep slope of the Tuya-Muyun massif. The cave is 60 m long and 35 m deep. It is of phreatic origin. The walls of the cave are covered with corallites belonging to the young phase of mineralization. Straight at the entrance to the cave there is a hall where a two-meter layer of aeolian loess lies. This cave was explored by an international expedition led by the Institute of Geology of the Kyrgyz SSR in 1989.

The best way to get to Kyrgyz-Ata is from Nookat or Osh or from Uzbekistan. According to the travelers, Kyrgyz-Ata National park is not well known within the residents of the area in general so it is best to get to Kaldai which is inside the park and ask for more information there. To get there take a shared taxi, rent a whole taxi or find a marshrutka from Nookat bus station. From Osh to Nookat you can take a shared taxi from the western bus station.

Tuya Muyun mountains are located about 20 km South of Chil Ustun and just few kilometers North from Nookat. It is easier to get to the canyon from the Nookat side – there is a road from it towards the gorge. At the entrance to the Aravan-Dangi gorge from the side of the Kara-Kokhty village, there is an open entrance to the former drainage adit of the mine. Images of mountain goats, horses and ritual signs known as the Naukat rock paintings can also be found on the steep walls on the East side of the Aravan-Sai River.

Page last updated 13.9.2020. This page is still a stub and has been created by collecting information from small bits and pieces and we feel that it is most likely not completely accurate. If you notice that something is not correct please let us know in the comment section!

The Celestial Horses of Aravan