Khorog - at the valley in pamir

Khorog is the largest town in the region that attracts people from far and wide to its well-stocked bazaars, supermarkets and teahouses. It is a hub of the Pamir where you finally enjoy a good wifi connection, a regular meal and a comfy night’s rest before or after the emptiness of the Pamir plateau. It is a great place to recharge from the long journey and organizing onward travels.

The town of Khorugh, also known as Horog, Khoroq, Khorogh, Khorog, or Xoroq is the capital of the Gorno-Badakhshan (Tajik: Kuhistoni Badakhshon, “Mountainous Badakhshan”) Autonomous Province (GBAO) in Tajikistan. It is also the capital of the Shughnon District of Gorno-Badakhshan. Khorug stands at 2,200 meters above sea level in the Pamir Mountains. It is home to about 30,000 people mainly for the Pamiri ethnic group. The city is settled at the bottom of a deep canyon (2,000 m) at the junction of the Pyanj, Gunt, and Shakhdara rivers. It is just across the border from Afghanistan, the Pamir Highway runs through the center of town.

Khorugh is known for its beautiful poplar trees that dominate the flora of the city. Although the town is relatively poor and suffered a decline during the 1990s, in recent years. Several new hotels and guesthouses, internet cafes, and restaurants featuring Tajik cuisine appeared in recent years. The city is experiencing a major renovation and is peaceful and quiet. Foreign aid organizations are quite active in the city’s development, particularly the Aga Khan Foundation, UN and EU development programs. Lately, the number of travelers increased though still relatively few, are bringing economic benefits and change.

There is no exact data about the origin of the history of Khorog. It is known that in this mountainous region once was a tiny state Shungan. It consists of several fortresses spread around. One of them called Kalai-Panjbar was located at the intersection of rivers Gunt and Panj, precisely in the place of the present Khorog. Primary, it was an independent mountain state.

In the 19th century, it fell under the rule of the Bukhara Khanate. And in 1986 the territory was controlled by troops of the Russian Empire. During the “Great Game” between Russia and Great Britain, Russians tried to get control of Pamir. They built a road from Osh to Sary-Tash, then to Murghab, and finally to Khorog. They established a frontier post on the banks of river Panj and a small village of Khorog start to develop. At the beginning of the 20th century, with the arrival of the Soviet rule, Khorog became an administrative center of the Gorno-Badakhshan autonomy. In 1928 received the status of the city. During the 20th century, it was a trading point on the Pamir Highway and still serves as such till today.

How to Get to Khorog?

Major transportation routes in GBAO run through or are reached, via Khorog. For instance, the Pamir highway north to Dushanbe and west to the town of Murghab, China and Kyrgyzstan. A dirt road goes along the Wakhan valley to Alichur village. Besides, another rough route to the east along the Shakhdara Valley to peaks Karl Marx and Engels. The distance between Khorog and Dushanbe is 525 km on the good road, it takes about 16-18 hours.

You can get there by the shared taxis and minibus from other cities. Besides, from Khorog you can get to Ishkashem in the south, Alichur village in and Murghab in the east. Journeys to further destinations may need hiring a 4WD jeep or van (UAZ), which is relatively more expensive. Furthermore, Khorog owns a small airport, accessible by small propeller-driven aircraft, and regular flights leave for Dushanbe and other cities several times a week. It is the only regularly used airport in GBAO.

Cuddled in a striking landscape Khorog is the regional center for administration, trade, transportation, and particularly, education. The Khorog still operates several Soviet-era plants for milk, meat, and bread production. Furthermore, several factories for manufacture shoes and building materials. Home to 2 universities University of Central Asia, Khorugh State University, and the Aga Khan Lyceum. Eventually meet here some English speaking residents. Architecture in the city resembles a typical Central Asian mixture of traditional Pamir houses and Soviet-style buildings. Although the center of town (along the Pamir Highway) is absolutely Soviet and rather ordinary. There are many unique and charming Tajik homes are built terrace-like on the river and into the hillsides above the town. Khorog is relatively compact town, so you can see walking just in a day. Botanical Garden is perhaps the most famous attraction in the city. It was founded in the middle of the 20th century to study and experiment with the survival of numerous types of plants under a mountainous climate.

Khorog central park is a perfect place to relax and enjoy an evening cool breeze in the center of Khorog. Khorog City Park is settled in the central part of Khorog, on Davronov Street. There are you find Chorbogh restaurant, an open area theatre, public swimming pool, and playgrounds for children and the Tourist Information Center. In the summertime, the park hosts a multi-cultural musical festival and various types of exhibitions at summer times.

The garden sits on the east end up in the hill and offers a great view of the town. According to the Guinness book of World Records, Khorog Botanic Garden is the highest botanical garden in the world. Although, according to other sources it is considered the second-highest after the Botanic Garden in the Nepal. Founded in 1940 by Ilaria Raikova, it has numerous species and varieties of flora. Recently visitors reported that the condition of the garden being neglected. You can get there taking local marshrutka from the town. The entrance is free of charge. 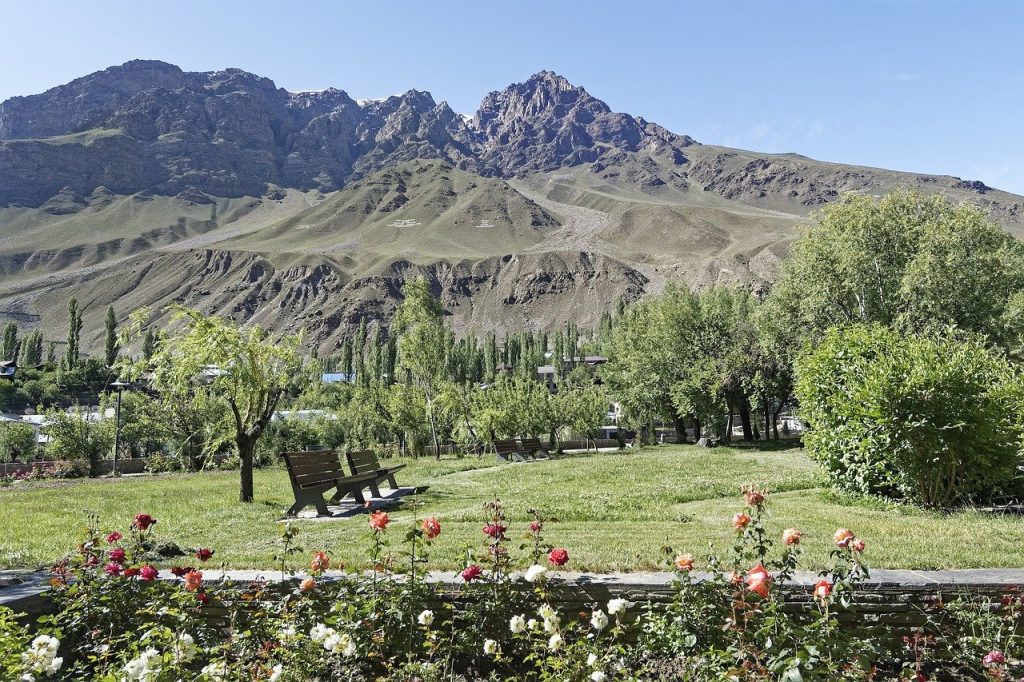 Khorog museum lies on Lenin Street, presents local historical and archeological collections. If you are seeking to get to know the local culture you shall certainly visit it. You can learn about the local lifestyle at different periods from the ancestor’s time till today. Unfortunately, information displayed only Russian and Tajik.

Perhaps the most active place in the town is the Saturday Bazaar. It stands on the Khorog Afgan-Tajik (Tem-Demogan Border Crossing). It is a typical bazaar where the stalls are shaded by colorful umbrellas.  You can plenty of woolen crafts, including traditional socks and some Pamir style fabrics. Afgan merchands come to sell food, clothing and handicrafts. However, it frequently closes due to border issues so better check beforehand in the Tourism information center in Khorog.

Next to the central part is the office of PECTA (Pamir Eco-Culture Tourism Association). Here you can get up to date information and they assist you with a further travel plan. For instance offer transportation, enquire about the hiking trails as well as give advice regarding the safety for those who are considering cross the river and pursue to Afganistan side. Besides, there you can get some permits to Zorkul natural reserve. In addition, you purchase there some souvenirs, geet free wifi and get some coffee.

Jelondy is another tiny town, is the home to several hot springs. The town is located 120 km east of Khorog on the road M42 Pamir Highway. The town is popular for its healing sanatoriums with some bathing and accommodation options. Hot springs are located inside of the building, if you not squeamish you should try it. Hot springs are not the luxury ones.